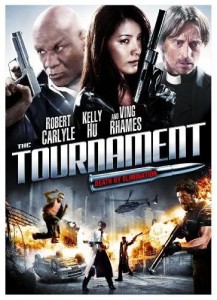 Every seven years a winner takes all tournament of assassins takes place somewhere in the world. A slickly produced, intricately arranged and top secret event that attracts the elite in the killing arts. All so that one of them can take out up to 20 of his competitors.

So tell me what do I have to do to hire someone to kill for me the following year with most of the ‘assassins’ section of the Yellow Pages out of business?

This edition is in suburban United Kingdom, with the usual multi-cultural bunch of characters and disarate personalities all showing up to take the cash, including deadly female Lai-Lai Zhen (Kelly Hu), a parkour guy, an American cowboy, some random tough guys whose only variances are in their accents, and carryover champ Joshua Harlow (Ving Rhames), who has only re-entered the competition to enact revenge on his pregnant wife’s killer.

The rules are simple: 30 assassins are dropped in close proximity, all are implanted with tracking devices and a corresponding locator. A time limit of 24 hours is imposed, if a winner is not clear when time expires the remaining implanted devices all explode, meaning no-one wins I guess.

The hosts of the tournament watch in a safe location some ways from the real action via CCTV. A group of IT nerds watch several screen for upcoming conflicts and feed through the appropriate vision to several high rollers who look on in an opulent setting surrounded by high class bimbos and top shelf booze, wagering on the next kill and the ultimate champion.

A far-fetched quirk in proceedings occurs when a boozed up, down on his luck priest (Robert Carlyle) finds himself an unwitting participant in the contest when he imbibes a tracking device. Of course within minutes he is set upon by heavily armed killing professionals and must ally himself with a bodyguard of sorts until he can extricate himself from the situation and move out of harm’s way.

That’s the ‘human’ side of the story. The reason to watch The Tournament are simple and undeniably 18 – 39 y.o. male. There is lots of blood, a great many gravity defying explosions, a couple of decent martial arts sequences (one which was filmed quite well), a great deal of extreme violence, and of course the parkour guy parkours all over the place, which is always momentarily cool. (For those wondering, Kelly Hu is the kinda hot eye candy, but she doesn’t get ‘em out.)

Unlike a great many so-called ‘action’ films I have seen in recent times, The Tournament has a few genuinely original sequences, none of which will change your life, but they at least remind you that not everything needs to be follow the same formula and obey the same rules. You could almost see parts of the action here seamlessly transplanted into a Crank film, where they would wisely add laughs.

It is the lack of humour and a frankly lame plot that resigned The Tournament to the ‘here’s what you missed two years ago’ bin at the DVD shop, it is the non-stop action that ultimately brings the film partial redemption.

Final Rating – 6.5 / 10. The Tournament sure is sparkly, noisy and exhibits symptoms that suggest it should be more in so many ways; entertaining, fulfilling and memorable. But forget what it ain’t, what it is as bad as it could be.