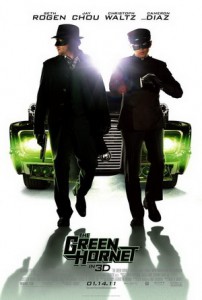 The Green Hornet isn’t an abject failure, once you realise who was really behind the film being made in the first place.

Michel Gondry may direct the film, but aside from a few creative surreal scenes it seems that he had the reins pulled back pretty hard to keep him firmly in the field of the mainstream. It is Seth Rogen who wrote, stars and has his fingerprints all over this sucker. Rogen is now a ‘Movie Star’, though he is bemused by his success and attention, the film plays out in the same way: It is a big budget film sure, but there are enough nudge-nudge moments along the way that suggest Rogen is asking himself “Can you believe we are being paid millions to make this?”

Rogen is Britt Reid, the son of a wealthy and renowned newspaper publisher. A Big Man in society. Britt grew up in a privileged environment but lacking attention and love.

As a result Britt grew up an attention seeking prick, a drunken party idiot relying on his fame and money to buy love and renown. His Dad apparently didn’t age a zack over the 25 – 30 years of Britt’s youth, adolescence and adulthood, he was still highly strung and easily agitated.

Then he was stung by a bee and died abruptly. “Now what?” thinks Britt.

Enter Kato (Jay Chou), a never seen before mechanic and general dogsbody for Britt’s father for years, and the man who left a perfect cup of coffee next to Britt’s bed each morning. Britt learns that Kato is a gadget guru, capable of making anything you can think of, he is also an elite driver and exponent of martial arts, as Britt labels him in the film a ‘human Swiss army knife… perhaps he was a little over-qualified to be a coffee boy butler? (Chou’s issues with the English language are also the reason that this film will be rewound a few seconds at a time for decades to come – this is not a diss, merely the facts.) 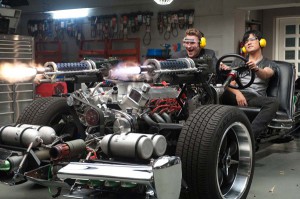 To Britt the next logical step is to form a crime fighting duo and pose as bad guys so that their friends and family can never be held hostage forcing them to expose themselves, allowing them to focus on wiping out the real crims.

No time for thinking! Moving on…

The lead bad guy is a Russian named Chodnofsky (Christoph Waltz), and there are a great many ‘jokes’(?) regarding the difficulties in pronouncing his name. Later in the film he changes his name to Blood-nofsky and starts wearing red to come across more scary-like. It must have sounded like a good idea at 3 in the morning to someone.

As luck would have it Britt does his own hiring at the newspaper where he doesn’t really work except for this one day. The only applicant for the temp role of his personal assistant is Lenore Case (Cameron Diaz), who holds a double degree including criminology and the newspaper biz (I can’t remember the exact name). So she knows the newspaper industry back to front and is capable of getting into the head of any criminal out there. PLUS she looks quite a lot like Cameron Diaz, and she’s going for a role as a temp… perhaps the most over-qualified office junior since Bill Gates inserted his pen pouch?

Don’t drown back there in the logic, press ever-onward!

The only guy who isn’t qualified to be anything of note is Reid himself, he starts out an arrogant, immature, puerile, sexist, insecure loud-mouth with zero skills that help with crime-fighting or super-hero work. More disturbingly he is also a cowardly git content to let Kato do all the heavy lifting, and quite willing to leave him in the lurch when things get out of hand. It’s also fair to say that aside from adopting a ridiculous monikor (in a lamentably poor scene) and wearing a mask he doesn’t change much over the course of the film. He is all of the afore-mentioned negatives, only now he has a mask! Rogen’s *AHEM* Britt’s constant yapping is around 10% amusing, 90% ridiculous and infantile.

The precious few action scenes are reasonably effective though still implausible – in one scene  Kato punches a guy through a car – they seem to be the only parts where Gondry was allowed to riff a little. The best of the these scenes though doesn’t even involve criminals but occurs in a stoush between Kato and Britt that destroys a luxurious, immaculately furnished room and ends up in the swimming pool.

Aside from the Blood-nofsky thing the master crim doesn’t get much to do aside from look puzzled, angry and envious of the Green Hornet’s notoriety. The black hornet-mobile is also underutilised, the unveiling was decidely cool and it obviously has some other bells and whistles (Two words: Door guns!) that can be dragged out when needed, but unfortunately that isn’t often enough. 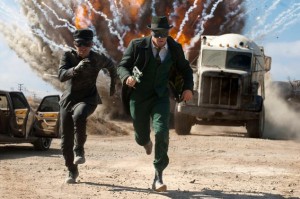 Even though all of the above is true and troubling it doesn’t necessarily result in The Green Hornet being an awful film. Sure if you go to the theatre expecting Iron Man, Spiderman or Batman you’ll be hugely disappointed, but really just how scary is a guy whose skill seems to be wearing a mask and hat and letting his sidekick do most of the work anyway?

The Green Hornet was never meant to be more than breezy escapist light entertainment, logic has no place here. If that is a concern you must avoid this at all costs. The problem may be that for the most part it doesn’t really even work as escapist entertainment, the film is light on for action and most of the chuckles are brief or even inadvertent. (There is a running joke about how Diaz is old, which either suggests Rogen has been writing this since he was an adolescent – or that he still possesses the intellect and thought-process of one.)

Final Rating – 6 / 10. I didn’t like The Green Hornet, but I didn’t hate it. That may be its greatest achievement; and the strongest recommendation I can give at this time.