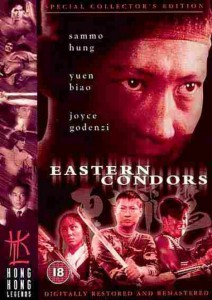 Sammo Hung wasn’t just the fat guy with the scar on his lip who hung around Jackie Chan (and directed some of his lesser films). He also made a large number of films in which he was either the star, the director, or both.

Eastern Condors is one of the better ones, but in saying that it is by no means a classic. Perhaps he needed to hang around with Jackie more than he would have liked to admit.

Eastern Condors is a Dirty Dozen style flick, only with more martial arts and more spectacular falls to death. 12 Chinese-American prisoners are released deep behind enemy lines in Vietnam.

Their mission: to save some prisoners and destroy a large arms stash.

Their reward: US citizenship, cash and release from prison.

Their initial liaison with the Cambodian underground introduces them to three hard-core chickies covered in camouflage and kicking much arse. Speaking of arse, one of the early feature kills happens to be a knife plunged deep in the unsuspecting anus of a man who unfortunately happened to be upside down at the time…

Sammo is the super-cool all business all the time dude, there are a bunch of other guys of course with their own idiosyncracies and quirks, including a memorable but cheesy joke involving the parachuting mishap of a compulsive stutterer, and as they progress through the mission some of the good guys drop off, a lot of shit blows up and victims leap away from the explosions.

There are many running battles, some in the jungle, some on the waterfront and the finale in an underground bunker. Some of the violence is less stylised and a little more realistic, mainly the violence involving knives, but aside from a couple of exceptions the tone is reasonably light. One notable exception: at one point they are sold out and captured, and there is a disturbing scene involving kids no older than 8 playing Russian Roulette with the lives of the prisoners prior to their escape.

There are many actors that are familiar from various Jackie Chan films made through the 90s, including Yuen Biao in the role of a “street-wise” (even though there are no streets) local who is co-opted to help – and who may or may not be trustworthy. But the unfortunate thing is that the first decent martial arts fight arrives with less than 10 minutes to go in the film.

The bulk of the action is weapons based with the action-flick staple of the bad guys having an accuracy rate of 0.000003% and the good guys 99.68%.

Look I liked the film but…

Final Rating – 6.5 / 10. An action flick without much worthy of special note. Some nifty shoot-em-up sequences and decent martial arts choreography and you’ve got a way to fill 90 minutes.