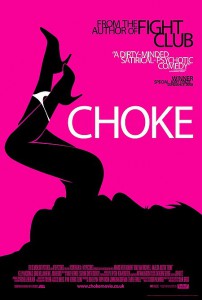 I can't make a joke without being dirty - sorry.

Choke is the ultimate “tweeny” film – too cute to be truly edgy and too edgy to be merely cute. This leaves it in the uncomfortable middle ground of not having either a core die-hard audience or mainstream appeal.

But I’m not here to market the thing, I only want to give my opinion. Well it’s interesting at times but I didn’t actually think it was really that deserving a film. That might be more a reason for its lack of box-office than their prudish attitude to sex, after all flash some celeb tit or show liberal amounts of nubile teenage skin and you’ve got a hit on your hands.

Sam Rockwell plays Victor – a sex-addict whose life is consumed with fantasy, physical contact and basically release, though he is never satisfied and is in fact afraid of true intimacy. His best friend is Danny and he suffers from the same affliction, they both work in theme park portraying US pioneer times, constantly looking for targets and boldly seeking encounters – however brief.

Therefore we are then subject to numerous cutaways and flashbacks showing various encounters in true Rob Schneider fashion – albeit with less “hilarious” disabilities and in a far better (though still average) film. If we believe these inserts (pardon the expression) Victor gets more tail than a rock star and flips over more chicks than Alfie in a standard week.

Victor and Denny both lament their affliction yet are ruled by its power. There is in fact a group session available featuring several others sharing their predicament but the allure of the flesh seems stronger than the desire for a cure and they rarely attend.

But that doesn’t seem to be the main point of the movie, although to be honest I don’t really know what is… Victor also regularly feigns near-death experiences – hence the title – and maximises on the newly faked formed bond by cadging off his carefully chosen benefactor on an ongoing basis to supplement his meagre income.

Victor’s Mother is in a nursing home in need of special care. As she raised Victor from infancy – he never knew who his real Dad was – he has an ever greater than normal bond with his Mum and visits her regularly (though again he seems to have tried it on – and often succeeded – with most nurses in the hospital). The problem is that the facility is not for Aged care but for mental health issues, and it seems his Mum has always had serious issues in the upstairs department.

In fact when Victor visits his own Mother doesn’t even recognise her son, so he adopts a variety of personas including lawyers and Victor’s friends in attempts to get through to her to spark frank discussions about his childhood and past.

On one such unsuccessful visit Victor is told by a woman named Paige that Mum is destined to move into another floor, one with more dedicated and intensive care – a bad sign – and he resists, though he does do his darndest to slide his Way into Paige’s Doctor’s outfit, his attempts rejected… initially.

The remainder of the film deals with Victor’s conflicting goals: he starts a torrid affair with Paige that quickly loses momentum when his “desire” is waylaid, while simultaneously striving to get through to his Mum and uncover more about his past.

Rockwell finally lands a lead and does his best to maintain our er… interest in an increasingly convoluted plot. I continually thought of him as more likable (as a character not a love interest) guy than a conflicted man rent asunder by desperation and addiction. Angelica Huston plays Mum as a loving but manipulative, selfish and deceitful woman, and Kelly MacDonaldis convincing as a woman that Victor… might like to have sex with???

The film suffers from trying to inject too many damn ideas into the fray, many of them are never actually seen through to any satisfying conclusion which creates an element of dissatisfaction. The main example of this is the Choking thing which supplies the film with little more than a title.

One vice I understand, another unnecessary quirk is a tougher act to swallow… in fact one might say this film Chokes on it… just a little at least.

This is a film that falls victim to its source material, while a novel might have hundreds of page with which to introduce and follow through with ideas, a movie has but 90 odd (in this case) minutes to do the same. A little more judicious exorcising of some extraneous elements might have helped here…

Or they could have just bought in more nubile young teens and asked them to flash the jubblies, that works too.