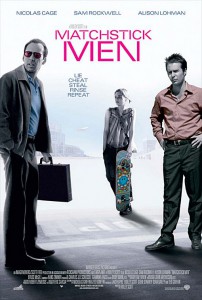 What a vague poster.

With Matchstick Men the reason this more or less arrived and vanished without a trace is that it has been made many times before, not necessarily better made but definitely made. And with a film like this the ceiling is quite low, meaning even if it is well executed it can still only ever be fairly entertaining. So perhaps it is high praise when I tell you this is fairly entertaining.

Roy (Nicolas Cage) and Frank (Sam Rockwell) are small time conmen, keeping things low key enough to avoid serious investigation whilst still enabling their nefarious lifestyle. They diddle little old ladies and the too trusting alike, but never to any massive extent. They use various ploys and various aliases to get what they want.

Roy’s life is ruled by repetition and superstition, he is fully OCD and everything must be done in an order and way that is logical, at least to him. If this daily routine is altered in any way by Roy or anyone else he loses the plot. One example has Roy clean his already clean house from top to bottom. Pills keep Roy (mostly) on the straight and narrow and aware of his restrictions. Funnily enough for someone with so many cleanliness issues Roy chain-smokes throughout the entire film.

This all changes when one day Roy loses his pills and finds that his regular Doc has retired. Roy also finds that his ex-wife has previously never told him that they may have a child, this is all a bit much for Roy. Upon consulting a new Doctor Roy asks the Doc to call his ex to make sure, and he is amazed to learn of the existence of Angela, now 14 years old.

At the doctor’s insistence Roy meets with Angela, he finds that she is a spunky and confident tomboy, quick witted and very smart, suddenly all seems to be going well in Roy’s life and he tells Frank that it is time to go for the “big score”.

After a time Angela moves into Roy’s home, being a teenager this creates significant issues with Roy’s condition and when one evening he comes home to find the house in disarray Roy gets more than a little wound up. After an argument and a temporary daddy-daughter estrangement Roy decides to open up to Angela as to exactly what he does for a living, instead of revulsion Angela expresses a desire to learn the ropes, leading to some basic training in “scamming for dummies”. When this goes wrong Roy decides at the last minute to ditch his normal order and bring Angela along.

After the botched scam Roy starts to realise the risks that his career poses for his new relationship with Angela, Roy decides that perhaps exiting the game for good might be the appropriate course of action. After all he has already amassed a considerable amount of cash through many years of low level scamming. Frank tries to talk Roy out of changing his mind or simply targeting bigger ticket marks, but shit gets complicated first.

The movie ends shortly after Roy realises the dangers of the illegal game that he was a part of for so long. The final acts seem pretty nifty at the time but don’t hold up very well to close scrutiny, especially if you consider the chain of events that need to happen to enable them to happen.

It’s basically hard to explain without giving things away but can I just say that there is a sequence of events that is implausible to say the least.

Final Rating – 7 / 10. The movie is entertaining and for a long while captures your attention, just try not to think too hard, you’ll end up second guessing a lot of what happens.

While I try to throw a joke or two into proceedings when I can all of the opinions presented in my reviews are genuine. I don't expect that all will agree with my thoughts at all times nor would it be any fun if you did, so don't be shy in telling me where you think I went wrong... and hopefully if you think I got it right for once. Don't be shy, half the fun is in the conversation after the movie.
View all posts by OGR →
This entry was posted in Film, Movie Reviews, Nic / Nicolas Cage, Worthwhile Movies. Bookmark the permalink.