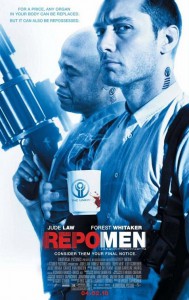 “No murdering till after coffee.”

This is not what I was expecting, Jude Law and Forest Whitaker in a “hard R” film about the body organ trade, but nonetheless that is exactly what it is.

Jude and Forest are Remy and Jake respectively and the Repo Men of the title. It is some point in the future and man-made human organs are all the rage, only you gots-ta keep up with the payments or the Repo Men will come and get the goods back.

Frank (Liev Schreiber) is a salesman who signs the sick and generally poor suckers up to back ended high interest contracts in full knowledge that there is a high probability that the wretch can’t keep up with the payments. As Frank says at one point the profit is not in the sale but the interest, and of course the organs can be used again.

So the reclamation process… not pretty. In the opening scene Remy interrupts a young couple to inform the gentleman that he is overdue, the initial “but, but, buts” go nowhere, and Remy coolly and calmly extracts said organ from the corpse and takes it back to the shop. In this sort of work a degree of danger is standard and Remy’s missus wants him to work in sales like Frank, away from the bullets and blood. After a BBQ turns into an impromptu vivisection she up and leaves him, taking their son with her.

As a result Remy is having doubts about his lot in life, Jake meanwhile seems very content and thrives on the opportunity provided when the overdue organ sensor that finds their targets goes off. He tries to convince Remy to go into a partnership with him and focus only on the big high dollar cases.

Nonetheless Remy has made his mind up and decides to retire after “one last job” (isn’t it always?). That last job involves him repo-ing a heart from a music producer (RZA). When the job goes haywire though it is Remy on the floor, he wakes up to find he now has a new heart of his own…

Now that Remy is simply another guy working to keep up with the payments things get a little more tense and serious. Remy wants to slot back in to the old job but he is suddenly scalpel shy and doesn’t want to complete some of the basic tasks that the role requires. His boss decides to put him on notice, but Remy’s new heart means new payments, and once he finds himself overdue Frank sends the boys round for a “chat”.

Meanwhile Remy finds himself with a kindred spirit, a woman that has multiple fakies and is also on the lam, they escape momentarily to the airport, only when that bid fails Remy decides on taking a more drastic course of action, something that Frank, Jake and co are very much against.

I’m a little bit over the whole “in a dystopian future” thing but this at least tries to be different from the main, I especially respect and acknowledge the decision to make the film a Hard R, so many movies cop out nowadays

There are some reasonable shootouts and a couple of brief chase scenes, nothing that jump out as awesome in any way. In fact aside from the premise this is all pretty perfunctory stuff and reminiscent of dozens of other movies, it is more the way they went about dealing with the material that earned the (limited) kudos from me.

Oh, and it’s not too often that you get Unkle and Method Man on the same soundtrack. As Ali G would say (if you paid him) Respect.

Final Rating – 6.5 / 10. Even if the film won’t blow you away it is refreshing to see a film take some chances and go all the way R. It is also somewhat gratifying to know that Jude Law isn’t always pretty.