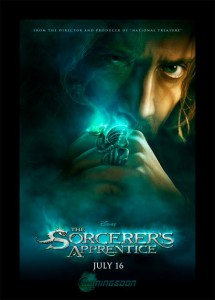 A while back a guy named Merlin took on three pupils: Balthazar, Morgana and Horvath. One went rogue…

Balthazar was then forced to trap Morgana and Horvath in a magical receptacle that looked like Russian Dolls, and because the only sorcerer powerful enough to kill Morgana once and for all – The Prime Merlinian – doesn’t even exist yet there they remain…

… for about 1,000 years. Over which time many things change, but not Balthazar’s raggedy S&M wizard outfit and scruffy “if I wear the wig do I still have to act?” hair. 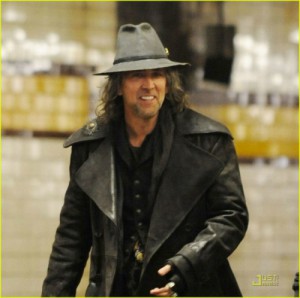 You’re on in 45 minutes Alice Cooper.

Back to the action: A chance encounter introduces a 10 year old Dave to proceedings and Balthazar immediately twigs that this is no random event – and that Dave is in fact something a little special. Bet you can’t guess in which way.

Unfortunately young Dave inadvertantly releases Horvath from his imprisonment and in the ensuing battle both he and Balthazar are trapped in another receptacle which is apparently time locked for 10 years. Compared to the thousand Horvath just spent that should be a walk in the park.

Dave is a big boy now, and he has written off the previous meeting as a wild daydream. Dave (Jay Baruchel) is a sciency-smart self-professed nerd, eschewing the normal college misadventures and the pursuit of tail for the pursuit of knowledge – until he runs into his hottt (all t’s warranted) childhood schoolmate named Becky, now a college radio DJ. 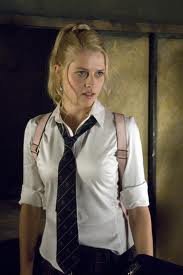 Becky actually adds nothing to the movie, her presence is basically extraneous. But at this point I would like to point out that this is a Disney movie and love interests are just mandatory. In fact there are three or four forced Disney moments where they simply try too hard to be charming and humerous, but wind up being try hard and annoying.

So to fast track this review Horvath and Balthazar both get out and continue on with fighting over the Russian Dolls with evil Morgana and Balthazar’s missus in it. Balthazar once again runs into Dave and convinces him to act as his apprentice, leading to alternating training montages and chase scenes that basically make up the remainder of the film, Horvath wants to release Morgana and Balthazar wants to stop him – with Becky and Dave’s burgeoning lurrvvve humming along in the background.

Dave’s stuttery, twitchy likability gets old real fast, especially as I’ve now seen it in 4 or 5 films. Every “Wha?”, “Woah” and “Hold on a sec” twigs a gag reflex I didn’t think I had. Nicolas Cage looks like he needs a nudge during scenes at times he is so obviously sleepwalking, I guess when you’re making a transparent cash in on Harry Potter in the hope of creating another multi-billion dollar franchise every day must seem like hump day.

There are CGI wolves, a giant mechanical hawk, a group of Chinese dragon dancers are magically morphed into becoming an actual dragon, and the Wall Street bull comes to life, technically it all looks fine but if you don’t care about the story that’s what remains, an empty technical achievement.

There is one truly cool visual in the entire movie and you’ve seen it – it’s in the trailer. Unless you have a desperate hankering for some PG magic and can’t wait until Harry Potter 27 comes out I would advise you to watch the trailer again. Then go watch another film.

The three times I nearly smiled were when the film made direct references to three other films, and I think I smiled momentarily as I thought of watching them instead of this.

Final Rating – 6 / 10. This is all so carefully constructed, it looks shiny and expensive but the one thing it seems to lack is spirit and a little adventure. Ultimately this is one chase scene after another with some CGI FX thrown in to pad out the running time.