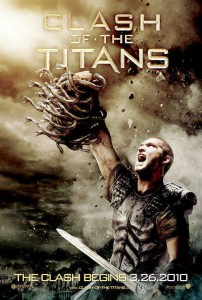 I’m about to give a spoiler-filled review of Clash of the Titans, hopefully this will not ruin your “enjoyment” of the film.

(For those of you who don’t know, CGI means Computer Generated Imagery.)

If that sounds totally awesome to you I hope you have a great time. I want my $20 and 2 hours back.

At one point someone says “Some day, someone will have to say ENOUGH”. I thought exactly the same thing in my seat.

This is hardly the worst film of the year, but it is in a word, bland.

Final Rating – 6 / 10. Just because computers make films like this possible, doesn’t mean they need to be made… or seen.