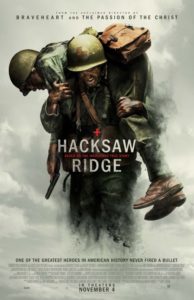 Stop me if you’ve heard this before; a story of courage that permits Mel Gibson to indulge in his most violent sequences, the kind of grotesque imagery that he undoubtedly sees in his dreams that find him waking in an aroused state?

Braveheart right? No. Surely Apocalypto? Did The Passion of the Christ have a sequel?

(And damn it Mel, you’ve done it again.)

Andrew Garfield plays Desmond Doss, a man of sincere religious principle who abhors violence but nonetheless wants to stand up for his country in World War 2.

After enlisting Doss finds his fellow soldiers and superiors highly dubious of his courage and commitment, what with his avowing not to carry or use a weapon of any kind. They give him the worst jobs and when that doesn’t work, the worst beatings, yet still Doss moves forward, fuelled by the strength of his admittedly contradictory convictions.

No one believes in Doss. Not abusive sergeant Howell (Vince Vaughn), not dismissive Captain Glover (Sam Worthington), certainly not any of his fellow soldiers who want and deserve a man who will have their back in battle. They doubt he will even be useful as a medic. Openly and often.

Bruised but undeterred, Doss sticks to his (no) guns all the way to the titular Hacksaw Ridge, which begins with a sheer cliff face that must be ascended before even the risk of Japanese rifle fire and artillery threaten to shred these brave men to shreds arrives.
6 times they have tried and failed. Doss and his company arrive on the eve of the seventh assault.

Despite victory being unlikely, the US forces continue to try to take this vital location, with success bringing easier access to avenues of further attack.

The cast is uniformly effective, with Garfield being the obvious centrepiece, adding to an increasingly varied resume that goes well beyond the ill fated webslinging. But it is the battle sequences which are the stars here. And now, director Gibson gets to indulge his inner demons.

The conflict scenes are predictably bloody and intense, a noisy din of explosions and pulverised flesh. While I have previously suggested that such films be released periodically to remind us of the horror of war, I can’t help but feel that Gibson derives some perverse form of satisfaction from eviscerating these hordes of historical brave young men.

Still he does it well.

Throughout the battle and especially in the blood drenched aftermath, Doss must find a way to contribute, and he does, as the filmed testaments that close the film inform us, this was a true story of courage against the nightmare backdrop of war.

Final Rating – 7.5 / 10. Mel Gibson will undoubtedly take a lot of baggage with him into the afterlife, but he is leaving a few worthy films behind at least.