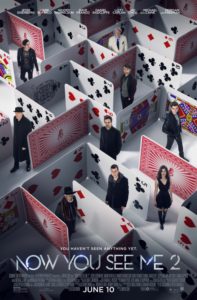 It has only been a couple years since Now You See Me was released, and like the title inadvertently suggested the film had already departed my memory banks. So a quick, spoiler free, reminder; four magicians with various specialties joined to become magic (and major crime committing) gang called The Four Horseman, becoming a global sensation in the process.

Woody Harrelson plays a hypnotist, Dave Franco a pickpocket, Isla Fisher is/was an expert at sleight of hand, and Jesse Eisenberg is the mastermind and showman behind the whole operation.

Well they’re still around, though the one played by Isla Fisher is now played by Lizzy Caplan, and Mark Ruffalo is the FBI agent still on their tail.

Since the initial shenanigans another global sensation has arisen in the form of a man who has invented a computer program that changes lives, only it is suspected by those in the know, that this new program is poised to extract personal information from the unknowing public and use it for more nefarious purposes.

The Four Horsemen must once again saddle up.

With so many magicians and so many sleeves, there are a great many rabbits to be summoned from seemingly nowhere. Too many, and this film jumps the shark early. It wasn’t the eccentric billionaire magic uber fan played by Daniel Radcliffe that tipped the scales, probably Woody Harrelson’s heretofore never mentioned identical twin that convinced me that this trick wasn’t worth becoming enveloped in.

Though the film believes it has us under its spell already, and takes incredible liberties in pretending that the horses not onscreen is really spun gold.

The film ‘thinks’ it boasts two pivotal sequences that illustrate our heroes’ abilities, though one is a pathetic and amateurish CGI dominated scene that tracks a card that must not be spotted, and the other relies on the old ‘hey they’re amazing!’ insta-crowd reaction to suggest the drab goings on are in fact astounding and worthy of going viral.

The first film was harmless and ultimately forgettable. It was not worthy of a sequel but here we are. This one sucks. First because we already knew the trick, second, because it wasn’t that good to begin with.

The fact that a mostly A grade cast sleepwalks through this pay check is evident early, but that won’t make you feel any better for being duped again by The Four Horsemen of Mediocrity.

This film might knock them dead at the magician’s conference, as it is probably how they see their impact in their minds, but it is just another bunch of hankies masquerading as doves.

Final Rating – 5.5 / 10. The biggest magic trick was conjuring a sequel out of nothing. You gotta know when to hold em and know when to fold em…