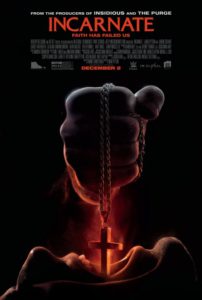 It’s a premise that demands a swiftly cancelled TV show; Dr Ember (Aaron Eckhart) is a wheelchair bound non-denominational exorcist who – with jaws firmly clenched – leads a small team of alterna-types as they rid various unfortunates of their unwanted spirits.

It’s a tough gig with (you would think) a limited client base, and let’s not ponder how a team of four makes enough scratch to exist, let alone fund such operations.

Actually let’s not ponder muchly at all.

Ember and co pursue a lead that takes them to 11 year old Cameron and his single mum, a woman understandably distraught but still maintaining sufficient awareness to be skeptical of claims that these dishevelled beatniks make of being able to ‘hack into’ her young son’s brain.

But ultimately he is possessed by a demon. Sometimes you have to go the extra mile.

After ‘incepting’ (only the first of many stolen ideas) Ember swiftly recognises clues that suggest this is no ordinary supernatural squatter. So begins a cat and mouse game through a child’s mind, with two determined interlopers vying for control.

Incarnate is a messy gumbo of stolen ideas (Inception, Flatliners, The First Power, Fallen), only without the ability to work them into something effective. Instead, like Fallen, the film discards each flimsy concept as it disintegrates, moving swiftly to another purloined moment.

The only nanoseconds to grab your attention are also predictable, namely the possessee acting strangely due to the influence of the possessor. Young Cameron speaks in an unnaturally deep voice. He speaks in tongues. He moves about in impossible ways. He can influence others. These are all cool cinematic concepts but not for a second are they original. That the film would expect us to be stunned is akin to handing someone a can of Coke and being grumpy when they aren’t blown away by the flavour explosion…

Final Rating – 5 / 10. Incarnate isn’t the Satan’s spawn the above might make it appear to be, but it’s far from worthiness.