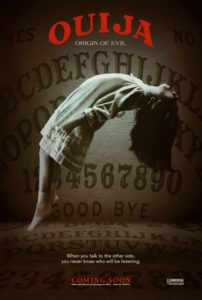 When a family of sham psychics find that even their elaborate (and especially unlikely) shtick isn’t fleecing enough customers to keep the bank from threatening to take away their home, they pray for something more.

‘More’ arrives in the form of a store bought Ouija board that fortuitously grants the youngest daughter special ‘seeing’ powers. Suddenly thief once fabricated foretellings become accurate and the shows more impactful, what with the young girl able to channel the dead and everything.

The fact that she very well may be inhabited by a demonic presence seems to be written off as a cost of business. As the famous saying goes; You can’t make money without letting evil spirits have their way with your daughter’s soul. Or something.

What the film does well is picking the right young girl to possess, this enables us to overlook the ridiculousness of it all. Mostly. I mean a speed writing Ouija board? A mother that doesn’t seem to fret when her daughter passes horrific news direct from the undead? The fact no one seems to think it odd that any of this is possible in the first place?

Ouija 2 is the usual collection of rips and cliches but it performs its work better than many. It progresses like an office Christmas party, starting out quietly and with some dignity, before getting noisier and slightly more embarrassing for all involved near the end.

At least there is no need for the ‘walk of shame’ after this one.

Final Rating – 6.5 / 10. If the original Ouija is as good as this one… well I probably still won’t bother looking it up.