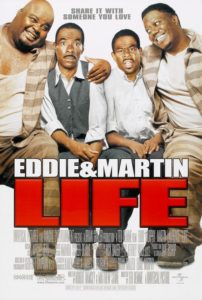 Before Kevin Hart there was Martin Lawrence, a man who found the spotlight despite over a decade elapsing without any evidence of his being humorous. In Life he is almost literally shackled to poor Eddie Murphy, who spends almost the entire film watching on droopy eyes, as if he is as confused as we are how it all came to this.

Ray (Murphy) and Claude (Lawrence) are big city boyz thrust together by inconvenience and ultimately sentenced to life of imprisonment in a semi-rural penitentiary.

It is their incompatibility and the close proximity of jail that is supposed to supply the friction and to no doubt be the catalyst of the inevitable laughter that must ensue, alas it never arrives.

Day on day, year on year, decade upon decade, life within the prison goes on, with a rich cast of recognisable black actors vying for screen time. But laughs never come, instead as Ray and Claude take their ‘one step forward, two steps back’ on their mission to either escape or be released, vaguely amusing moments are set up and knocked over, without anything more than a wry ‘so that happened’ reaction.

If I was wrongfully imprisoned for a crime I did not commit – or a film that would not end – I would rather try something Big and have it boom or bust; an attempted escape, a daring adventure, an actual joke, rather than sit for an interminable time until the end arrives.
If the script for Life was leaked, it might read; “Open. Ray and Claude go to jail. Nuthin. Nuthin. Nuthin. Nuthin. Nuthin. Nuthin. They old now. The end.”

Life should be about the vitality of being, of overcoming, of surviving. Instead to this viewer it sure felt like the ‘life’ sentence imposed upon two unwitting small time criminals was somehow passed upon to me. I’m innocent too. Why punish me Martin Lawrence?

Final Rating – 5.5 / 10. Shrek arrived only a couple years after Life, and with that, Eddie Murphy knew he no longer needed to try…