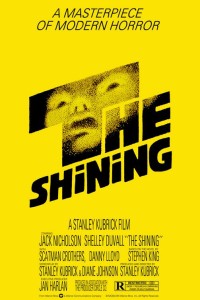 Look I’ve tried. I have watched The Shining probably five times in twenty years. I have never gotten it.

Even before The Simpsons and Family Guy lampooned it 137 times it didn’t wow me. Even before ‘redruM’, the gushing elevator, the twin girls, the trike, the typewriter and ‘heeeeere’s Johnny’ became pop culture staples, even though many who spout the lines don’t know the source. Even though The Shining tops countless Best of Horror lists the Internet over. I don’t get it.

Sure the premise is solid – a young family takes a caretaker job at an isolated snowbound hotel for the winter – beware the quiet, even if as an author you need it to make a living. The acting is also good, Jack Nicholson’s evil eyebrows and Shelley Duvall’s petrified facial features anchor the film.

But is this really that incredible?

So there may really be a sentient being in young child Danny’s index finger. He may really be able to contact the elderly man across thousands of miles telepathically. Jack really might hear voices, see things that don’t exist and have conversations with ghosts, but all of that?

Again I don’t want to go against the consensus but I don’t see it. Stanley Kubrick really might be the best director ever and a genius and a creator of some of the greatest films of all time, but this is heavy handed and over preparing stuff trying to cover over a plot that is trying to push too much blood out of the elevator at the same time.

Is it well made? Yes. Is it compelling and occasionally excellent? Yes. Is it horror? I… Guess. Is it scary? No. Is it the greatest horror film of all time? Hell no.

Final Rating – 8 / 10. I keep thinking I need another viewing to highlight to me what I have missed so far. After half a dozen viewings, I give up.