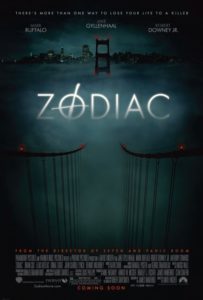 Like last year’s Spotlight, Zodiac tells a story in a deliberate and procedural way without flash and bullshit – and it is all the better for it.

As with Spotlight, this film concerns itself with real events, in this case the self-dubbed ‘Zodiac Killer’ who kept much of California’s doors bolted and it’s citizens home bound for over a decade commencing 1969. Unlike Spotlight, the guilty party is never actually identified… But that doesn’t make the search any less compelling.

Regardless of his true identity, the Zodiac Killer craved attention above all. His murders are depicted as slightly haphazard and rushed, while his admissions to the media and lengths to remain notorious are far more intricately planned.

It is a letter and code sent to the San Francisco Chronicle newspaper that anchors the film.

The fact that Zodiac seems to prefer to correspond with the media infuriates the police, especially Inspector David Toschi (Mark Ruffalo), who – like us – just wants closure in the form of an answer.

Such a landmark and fascinating case ensures that all involved become varying degrees of obsessed with solving it. All who permit themselves to the cause are changed, none for the better.

The acting here is uniformly excellent and without a weak link. Even the minor roles are well cast and impressive.

The film deliberately and expertly crossed decades, with new clues, red herrings and minor breakthroughs all proving equal parts frustrating and motivating. Despite the knowledge that the true killer was never categorically known, the film remains captivating and worthy of your two and a half hours.

Final Rating – 8 / 10. It rarely happens that a bona fide true story is worth watching. Remarkable then that this one doesn’t even have a clear resolution.