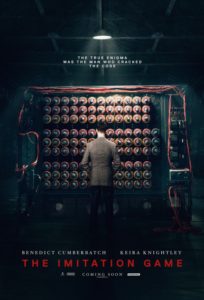 Based upon an amazing story that was classified top secret for so long that once the truth arrived the impact had dulled, The Imitation Game follows the UK army intelligence’s efforts to crack the Nazi ‘Enigma’ code, thereby learning enemy secrets and gaining an advantage in World War 2 (Spoiler: they did and they won).

The only problem being that the Enigma code was uncrackable…

With the usual code breaking methods and the best efforts of experienced army crackers failing, the government moved to other means.

Enter professor Alan Turing (Benedict Cumberbatch), a mathematician of undeniable genius, but with his smarts coming at the expense of social grace. Turing agrees to take on Enigma not to turn the tide of the war or even to aid his country, but to break a code no one else can. When he finds that none in the intelligence team think like him, he foregoes such experts and seeks other… Nerds essentially. Crossword addicts and pasty shut-ins fascinated by puzzles. One of them *gasp* is even a girl named Joan (Keira Knightley), whom the top brass feel is better suited for the typing pool.

But Turing cared not for the usual rules and gender stereotypes. Actually the usual niceties and norms did not apply to this man. Again this leads us though back to the film’s conundrum; Turing’s solution to the Enigma code was to build a huge machine – a calculator of sorts – capable of screening millions of scenarios of code. The machine, elaborate and imposing, is so complex that there is no way we mere mortals could understand its workings, so the film becomes more about ‘the stuff that goes on while Turing and the crew build it’.

Thankfully this remains compelling and interesting across the film’s two hours, with Cumberbatch giving a portrayal of a brilliant but socially retarded man leading a life full of secrets and compromise.

The Imitation Game nearly falls for the same trap as The Theory of Everything and pretty much anything about Steve Jobs: in that it has a reasonably fascinating subject but is incapable of ‘dumbing down’ their central figure’s work while entertaining us popcorn chewing automatons. So they focus on the eccentricities and foibles of the individual, and it is here that The Imitation Game excels.

Unfortunately being a movie about a nerdy mathematician that no one has heard of, and with an unwieldy title that tells us nothing, means that the only code Turing couldn’t break was how to make this commercial…

Final Rating – 7.5 / 10. The Theory of Everything’s spiritual kin; a semi-bio about a character of more interest to the film’s plot.