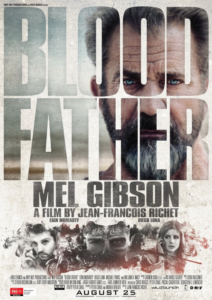 When certain actors play against type it just doesn’t work. When Jackie Chan is anything but an effervescent an energetic ball of positivity, it ain’t right. When Robert Downey Jr. shelves the quips and winks, things are amiss. So it is so very apt that since Mel Gibson was outed as a hate spewing scumbag, that the only films I can believe him in portray him as unlikeable and ornery, with the underrated Payback being the best.

In the formulaic but efficient Blood Father Mel is John, a self pitying broken man living in self imposed squalor, giving tattoos from a trailer that looks like it hasn’t been cleaned or updated since he used it in Lethal Weapon 2.

John has a tough life, but an uncomplicated one. Then, out of the blue and after many years of silence, his daughter Lydia calls.

Lydia alternates every plea for help with a dismissive comment belittling her father. She also does neither herself nor John any favours with her ‘whatever’ attitude and the 17 year old need to be liked.

No surprises then, that it was a case of ‘wrong place, wrong people, wrong time’ that lead to some especially dangerous guys wanting Lydia, and by association John, very much dead.

John must call in favours from long lost friends and those from his past that are no longer friends (played by William Macy and Michael Parks etc). Other dangerous people. Nasty types. In doing so John proves that he himself was, and again is, a dangerous man in his own right.

Blood Father is grimy and gritty. It wisely stays in its lane and doesn’t try to be flashy or clever. It bludgeons its way to almost worthiness, but can’t quite get over the hump, mainly because it is almost too simple, then asks for too large a logic leap in order to get to the climax of the film. (Also, I know Lydia is an annoying teen, but surely this annoying is too annoying?)

Still, grumpy Mel is the only Mel I can accept now. There can be no carefree and irreverent Mel. If that leads to more films like Blood Father, then I can handle that.

Final Rating – 6.5 / 10. The kind of film that keeps Netflix in business… and Mel Gibson from absolute anonymity.