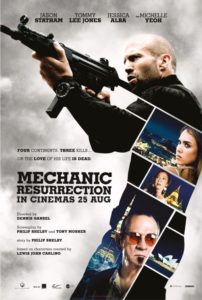 With sequels to low budget unexpected successes – even modest ones – there are two ways to go; you can continue full throttle with a bigger budget and hopefully snag a big name co-star to go alongside the headliner from the original (See Ted 2) or you can cheap out, replace your lead actor with a pale facsimile, and churn out more of the same crap hoping that name recognition does the job. (See Hard Target 2.)

Either way it seldom turns out well, though option one generally ends more profitably.
In the case of The Mechanic Dos, they couldn’t decide, so even though they convinced Jason Statham of the merits of making one of his assembly line films into a rare sequel, they cut corners everywhere.

The entire premise is a headscratcher, Bishop (Statham) is rudely uprooted from Rio de Janeiro where he has been happily laying low, and moves to sleepy and tranquil Thailand, where he meets a beautiful young woman with idealistic zeal. She is Gina (Jessica Alba), and despite the fact that Gina point blank tells Bishop that she is mere bait sent from the bad guys to lure him out of hiding, Bishop falls in love with her anyway. They even have sex. Yes, true love.

So if they knew where he was why the need to lure? Especially when they end up rushing in headlong all guns blazing anyway.

But that’s not the least of it. Across many continents Bishop is forced to perform hit jobs against his will. Against my will if I’m honest. And like Statham himself each job screams bare minimum.

The action is uninspired. The jobs are ridiculously unlikely, and the events implausible. In one scene Bishop stops himself from blowing up by hiding behind the guy holding the exploding grenade. Sounds safe. In another he hides behind an inflatable lifer aft that is nonetheless bulletproof, before again hiding behind a man being riddled with bullets,  though apparently not the type of bullets that pass through more than one body at a time…

Oh Statham what is this… Can I just say that if Statham continues to play everything straight, then surely someone else needs to be interesting? It sure isn’t Jessica Alba, who continues to coast upon the name she had a decade ago (just like Britney Spears does). At least she tries to replicate the most giffable seconds from Into the Blue. Michelle Yeoh is here, playing something of a protective figure to Bishop, though she must have shaken her head at the action sequences given what she was able to do in Police Story 3.

Which only leaves Tommy Lee Jones padding his superannuation by wearing a couple earrings and delivering lines as if they are being translated from a foreign language directly into his ears.

Sure Statham makes a lot of crappy, samey films. To be honest I couldn’t even remember a thing that made The Mechanic stand out. Certainly nothing that said ‘sequellize this’. But the longer this excruciating mess went on the more confident I became that it wasn’t Statham’s manager that convinced him to do this, it was his travel agent.

Final Rating – 4.5 / 10. Even Bad Statham is usually comforting, which makes just how bad this is all the more disconcerting.

While I try to throw a joke or two into proceedings when I can all of the opinions presented in my reviews are genuine. I don't expect that all will agree with my thoughts at all times nor would it be any fun if you did, so don't be shy in telling me where you think I went wrong... and hopefully if you think I got it right for once. Don't be shy, half the fun is in the conversation after the movie.
View all posts by OGR →
This entry was posted in Crappy Movies, Film, Jason Statham, Movie Reviews, Superstars. Bookmark the permalink.