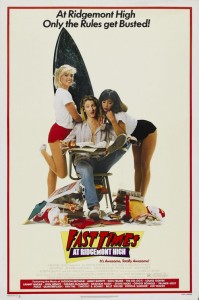 At Ridgemont High the kids talk sex, have sex and think about sex. All day. Every day. They talk about it at school. They set it up at the mall. They have it at almost anywhere.

Maybe if I Fast Times at Ridgemont High before the 137 others that followed in its teen-sex comedy footsteps, I might have been more affected.

I might have overlooked the fact that there is hardly a joke in the film, and aside from Sean Penn’s stoner surfer dude, not a character even fishing for laughs.

I might have ignored the fact that the film doesn’t even attempt to push the plot into creative and unexpected areas. I mean there is a ten minute scene where a young guy asks a girl out then forgets to take his wallet on the date. The ‘punchline’ being he must call a friend and ask him to deliver said wallet. Then, in an amazing twist, the guy does that, enabling the guy to pay and leave.

The only memorable moment being the famous dream sequence that culminated in Phoebe Cates emerging from a pool in a red bikini before slo-moing toward camera and removing a very important part of said bikini. The scene became instantly immortal – and for good reason – launching millions of zipper-rockets in salute since.

Final Rating – 6.5 / 10. The Phoebe Cates is Hall of Fame material. But the rest? Not so much. Still, better than Dazed and Confused.