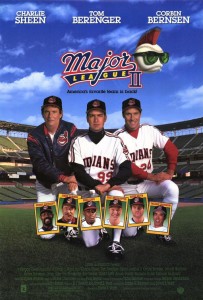 Major League was a wonderful concoction of rich characters, amusing events and well executed sequences that transcended mere ‘baseball’ to reward even non-baseball and even non-sports fans alike. Watching the film wouldn’t convince you of the merits of America’s pastime, but you would be hard pressed walking away displeased to have seen it.

I loved it then and still do, but I could never see the point of a sequel. After all, they overcame everything to finish on top. In a repetitive sport like baseball, which to my mind revolves around efficiency, stats and basic skills like hitting and catching, what else could they do to shake this up?

The answer is nothing much really. Major League 2 manages to bring back over 80% of the roster from the original film, but can do nothing to elevate this above the predecessor.

While most of the cast is unchanged, there are subtle changes aplenty as the film opens; Wild Thing Rick Vaughan (Charlie Sheen) has gone boardroom, Voodoo priest Cerrano (Denis Haysbert) has gone Buddhist, Willie Mays Hayes has gone Hollywood (and Wesley Snipes has gone, replaced by Omar Epps in a pretty good imitation), Jake Taylor’s knees are gone, sending him to coaching, and Roger Dorn has gone all the way into the owner’s box.

And really of the core group from the first film only relief pitcher Eddie Harris (Chelcie Ross) is gone-gone.

Also gone though, is the inspiration. While the first film was formulaic and fairly predictable it absolutely nailed every aspect of that formula. The first half of this film does all it can to break the successful team down to rubble, with the aim of resurrecting it again in dramatic fashion, but really all it can do is remind us of the first film.

The characters remain likeable and amusing – though I would have thought a rough around the edges Wild Thing would be a far more commercial marketing prospect than a suit wearing automaton – and the larger than life characters of team manager Lou Brown (James Gammon) and broadcaster Harry Doyle (Bob Uecker) are welcome if a little misused, but this film would only ever be worthwhile if the first film didn’t exist. And I don’t want to live in a world where that is the case…

Final Rating – 6.5 / 10. Likeable but laugh free. And PG, which dilutes the hijinks further. 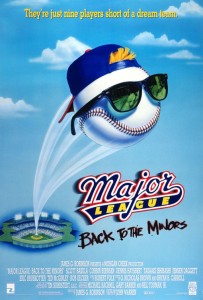 Major League 3: Back to the Minors

With the allure and impact of the big leagues exhausted, Major League 3 looks to a new underdog. And how to generate a rivalry between any Major League team and another faceless opponent? By having that opponent not even exist in the Major Leagues, that’s how!

Roger Dorn now owns the Minnesota Twins somehow. He taps over the hill hitter Gus Cantrell (Scott Bakula) and his magnificent stringy mullet to coach the minor team the Buzz, with primary importance given to developing a powerful but raw hitting prospect ‘Downtown’ Anderson (Walton Goggins).

Cue the usual bumbling and stumbling, and the juggling of egos and eccentricities, which culminate in Cerrano, Rube and Japanese oddball Taka – the latter pair so memorable that I didn’t even think to mention them in the review of ML2 – to round out the squad.

The ‘fun’ starts when Dorn arranges a head to head exhibition match between the Buzz and the Twins, figuring the young and hungry minor leaguers will bring it against the lazy and non-competitive highly paid pros, fronted by the brash and arrogant Leonard Huff (Ted McGinley).

It works. The guys who would kill for a job put it to the guys who don’t seem to appreciate theirs. But this time around the roster is too thin to make an impact. With no Wild Thing or Willie Mays Hayes, a Downtown Brown just doesn’t cut it. To try to compensate Harry Doyle finds himself demoted somehow also, and furthermore he is given a new largely colourless colour man to disagree with. Where his antics were once amusing, they are now overbearing and tired.

As is the franchise. It’s hard for any sports team to stay ‘up’ for long. Ditto for movie franchises. Eventually they run out of energy and inspiration and we’re left with three once handsome actors in Bernsen, Bakula and McGinley all doing their best to remain relevant after the looks have faded by taking anything offered to them. In saying that I must admit that my biggest laughs came near the end of the film where McGinley allows his lustrous hair to be unfairly manipulated for ridicule’s sake, but laughing at haircuts and jokes about big balls must surely indicate a trilogy two films too far.

Final Rating – 6 / 10. Eventually even the most tenacious and appealing underdog should face reality and quit.