Wyrmwood: Road of the Dead (Review) 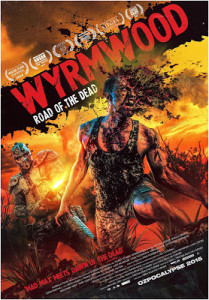 The premise here is an amalgam of thirty three other zombie movies, only here the non-zoms eventually decide to wear Mad Max like kit before dispatching the undead, and they pepper the inane dialogue with ocker strine laced with F-bombs. One guy manages to (allegedly) quote a bible verse before suavely adding ‘and they killed a fuckload of people’.

I could list a dozen zombie films from the years that this film lazily lifts from. But I won’t. Just know that some of the films ripped are good, some not so much, but Wrymwood improves and enhances on none of them.

In fact there is absolutely nothing here that fast forwarding wouldn’t improve. The depressing Wyrmwood: Road of the Dead does only two things; it adds to the ever increasing series of ridiculous film titles ending with ‘of the Dead’, and proves that when it comes to low budget horror, Australia can make ‘em just as shit as the rest of the world’s most inept filmmakers.