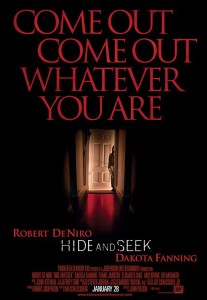 When his wife suicides respected psychiatrist David Calloway (Robert de Niro) takes his young daughter Emily (Dakota Fanning) far away from the New York pressure cooker environment, to a large house in the middle of nowhere.

This new home is spacious and quiet, with grounds to run around in and rooms to play in. Emily tells David of the presence of her new imaginary friend ‘Charlie’.

After settling in they get to meet the neighbours, who include another single parent (Elizabeth Shue), and a couple who have lived through the tragedy of losing their own child. They are also visited by David’s former colleague (Fammke Janssen) who is obviously concerned with how they are faring in the wake of loss.

But the answer to all is Charlie. Charlie, Charlie… Charlie. By all accounts a mischievous tyke who enjoys playing hiding and seek and getting up to low level mischief. Initially David grins and ignores things – kids will be kids – but the nature of Charlie’s interactions becomes more serious, and potentially dangerous.

Unfortunately the film never proves nearly as threatening, coming off like a film Brian De Palma could have farted out in the late 80s. De Niro especially looks frustrated, perhaps baffled by the material available to him at this stage of his career. His bottom lip quivers, his eyebrows furrow and he sports a perplexed expression throughout, but there is nothing to be confused about here Bobby, you agreed to headline a shitty film.

This is a long, dull and pointless trip to a place no one wants to go.

Final Rating – 4 / 10. “Mr De Niro? This is Future Success calling. Yeah, I’m not going to make it to our appointment. Go on without me if you like.”