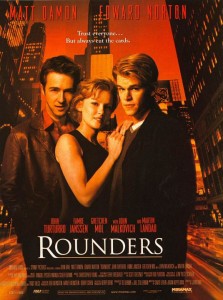 In the poker world Mike (Matt Damon) is a ‘grinder’, a skilled poker player who plays the game by the book without resorting to cheating. He reads his opponents, works the odds and tries to manipulate the ‘pot’ (potential winnings) through savvy bets. Grinders don’t force the issue, but bide their time until they can take one big pot that justifies the countless hours and stress of maintaining a blank facade when surrounded by individuals who would exploit your emotion to extract your wallet.

After being burned badly Mike sensibly withdraws from the ‘game’ and tries to go it straight. Noble intent indeed, but doomed to failure. The sand in the gears is Worm (Ed Norton), Mike’s lifelong friend and constant provider of both bad advice and temptation. Worm doesn’t like building and grafting. He is a cheat and a bad influence. Mike knows that Worm will cause only problems, but he is the bad influence that he cannot shake.

It should hardly be a revelation to learn that the world of illegal high stakes gambling is hardly a well regulated and controlled one. Even other experienced grinders like Joey (John Turturro) fall afoul of the odds and local kingpins like Teddy KGB (John Malkovich) sometimes. And in fact the opening sequence of the film practically guarantees that Mike and Teddy KGB will face off with everything on the line prior to the arrival of the closing credits.

It’s just a matter of when and how much pain Worm will cause myself and others before it happens. The answer is ‘when you expect it’ and ‘a lot’.

Poker players and fans of the *vomit* ‘sport’ will probably be captivated by this film. But then again anyone who enjoys watching strangers play poker would likely be captivated by a lava lamp. But the script here is simply so easy to write. When it comes to cards in movies there should be no tension, because there is no randomness. The writers simply choose who wins and then allots the appropriate cards. In real life no one genuinely knows. In a film it’s basically tantamount to the director cheating.

Matt Damon and Malkovich do their best to make tension while pretending they don’t know how it all ends, and there are a few moments where you get to wonder whether he will see this through. But to be frank I find it hard to summon the energy to even pretend this interests me, such is the level of passion I do not have for the topic, and blunter still this is hardly a new version of the tale anyway.