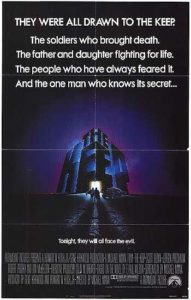 I only wish I could tell you what this is all about. Set in Nazi occupied Romania in World War 2, The Keep is an imposing stone structure that instantly catches the eye of the invading Nazi troops, both as a secure base camp and as a site for potential looting.

The resident caretakers present no resistance, but leave the intruders with one ominous comment “we will not stop you. But you cannot stay here”.

The Nazis say “thanks but we’ll be right” and get to looting the silver crosses from the stone walls. But is the Keep a structure to keep things out, or to keep things in…?

I’m honestly asking. This film is confusing as fuck.

Scott Glenn gets called in to exorcise the structure. Ian McKellen starts old but gets young. Something that looks like it fell out of Star Trek prowls the halls. Another thing – or maybe the same thing – seems to evolve Hellraiser style.

The entire tone here is woozy and dreamlike, and like a dream you emerge rubbing your eyes with little recollection of what you just experienced.