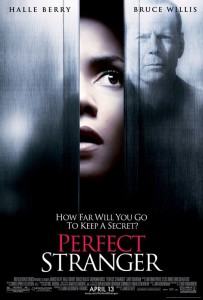 They could churn one of these whodunnit films in a week, and it looks like the makers of Perfect Stranger did exactly that. They probably could have taken the weekend off too… Bruce Willis doesn’t seem to open his eyes throughout the drab proceedings. There’s every chance that he got his payslip and asked what it was for.

Halle Berry is Rowena, a muckraking journo hell bent on proving advertising company CEO Harrison Hill (Bruce Willis) is a philandering scumbag. To do so Rowena finds a temp role within his company, and uses her tech savvy buddy Miles (Giovanni Ribisi) to hack in, join chat rooms and learn about Hill’s tendencies and proclivities.

It’s remarkably easy apparently. Within days Rowena has caught both Hill’s eye and his online interest via an alias and a couple minutes in a chat room.

The movie spends an hour making everyone look like a suspect including Hill’s leggy female assistant and an ex, something confirmed by the trivia tidbit explaining that there were several potential culprits at script stage and even through filming.

Halle Berry obviously thinks her natural attributes do the work here, but at least she tries a little, Bruce Willis smirks and scowls his way through a 40 minute cameo that screams “just pay me”. Dunno how much he earned, but even if it was a hundred bucks he was overpaid.

The worst aspect of the film is how the reveal and motivations arrive after the event, without showing earlier clues or hints to make you feel foolish about missing them earlier.

This time the film is foolish – and lazy as hell.

Final Rating – 5 / 10. Always horrible when a film feels getting the Star-Power means not worrying about the quality of the end product.