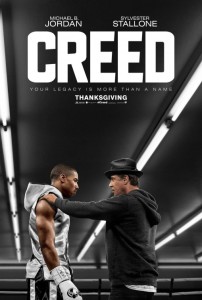 Fake fights are a million times more interesting than real ones, and no one did fake fights better than Sylvester Stallone in the 80s – even though thousands have tried to replicate his cinematic pugilistic deeds.

Adonis Creed (Michael B Jordan) never met his dad. He died in the ring at the gloves of Ivan Drago in the battle of Rocky 4.

With his birth mum abandoning him and a youth spent in facilities for troubled youths, it took a ‘rescue’ of sorts from Apollo Creed’s wife to give Adonis a better life.

Now an adult with a well paying office job and a chance to forge his own way, Adonis is willing to give it all up for the chance to prove himself in the ring.

But no-one wants him to box. Not his mum. Not the guy who runs his late father’s gym. Not even Rocky Balboa.

They surmise that coming from wealth the will be no desire, no drive, no desperation.

Adonis eventually convinces Rocky of his worthiness by asking for only two rules; we train dirty, and no one is to know his true identity.

Creed starts slow and builds in traditional Rocky ways – even though Stallone did not write this story. The training sequences are not as grandiose as those in the 80s Rocky films, but they are again central to the film, and I dare anyone to watch Rocky and Adonis hit the speed bag side by side without chills.

Creed starts a relationship with a headstrong young Philly singer Bianca (Tessa Thompson) and quickly finds a fight to work towards. There are other characters in the film, and obviously a chief rival to throw hands with, but the film of the most part is about Rocky, Adonis and Bianca.

This film is more dramatic than any other film in the franchise, and the Big Development less unlikely than that in Rocky Balboa. There are less hooks and gimmicks (motorbike wheelies aside) than before, no Hulk Hogan or PS4 simulations here. This is a drama about the boxing world with two kick-ass, cauliflower ear generating fight scenes.

The acting is also better than any previous edition. Rocky easily slips into the weathered and worn visage of Burgess Meredith’s inimitable trainer Mick, and Michael B Jordan might initially appear non threatening – which is kind of the point – while he’ll never be Rocky, he’ll be just fine as the current Creed.

Final Rating – 8 / 10. Time will tell if there is a franchise within this character, and the film smartly leaves a few avenues open, but for now bask in an unlikely modern day classic, and consider the torch passed…

While I try to throw a joke or two into proceedings when I can all of the opinions presented in my reviews are genuine. I don't expect that all will agree with my thoughts at all times nor would it be any fun if you did, so don't be shy in telling me where you think I went wrong... and hopefully if you think I got it right for once. Don't be shy, half the fun is in the conversation after the movie.
View all posts by OGR →
This entry was posted in Film, Movie Reviews, OGR Recommends, Sly Stallone, Superstars, Worthwhile Movies. Bookmark the permalink.