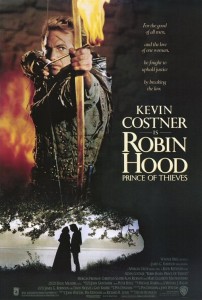 If this was made a decade later there would probably be a Disney ride made in its honour.
Instead it is an effortlessly entertaining and only slightly dated version of the famed Robin of Loxley – better known as Robin Hood.

As the film opens Robin (Kevin Costner) returns home from the violent crusades, followed by the indebted Azeem (Morgan Freeman), to find his former home desolate, and his lands rife with corruption.

With his former good name rendered mud, Robin flees to the nearby Sherwood Forest to find others like him, good men turned bad through desperation. With a couple of arrows and a clumsy speech, Robin bonds them all together and unites them against the common foe of governance, brilliantly personified by Alan Rickman as the Sheriff of Nottingham.

This is not a history lesson, more a boy’s own adventure full of swordplay, swinging on ropes, saving maidens and fast movement. And in that it thrives. The critics had a field day on Costner’s on/off English accent, while they should have been revelling in the action and guffawing at Rickman’s audacious overacting. Rickman chews the scenery and spits every line of dialogue. He is the exact ham that this film needs.