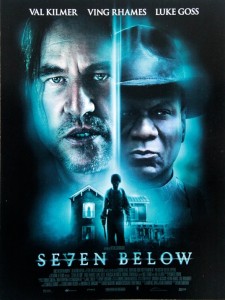 A packed car swerves on a lonely road to miss a woman dressed in old-timey clothes. The car crashes. A man appears to provide assistance. He is Jack (Ving Rhames). He takes the shaken passengers to his nearby home. Among them is Bill (Val Kilmer). Bill is concussed and unsure of himself. He is acting obnoxiously. But he was acting obnoxiously well before the accident…

Jack tells them that bad weather is coming and they should settle in for the night. They grow want to leave. They try. They pick up a woman tending to a broken down car. They learn they can’t leave.

They return to the home.

At Jack’s home people who just met share deep secrets about themselves and their families. Stories of their ancestors. Things you might tell people after you have known them for years. Jack tells nothing but looks on.

The house itself has secrets of its own, and it seems even more hellbent on clumsily telling everyone about them.

Bumps. Steps. Groans. Laughs. A mirror. A bed. A peephole.

Subtle it ain’t, and it only gets louder…

7 Below is a film that was made because. This couldn’t possibly have been a priority script. There must have been a tax dodge or an studio allowance that had to be used by a deadline.

I can’t see how else anyone felt this was a good idea.

Certainly Val Kilmer sleeps through the film. Even when he isn’t unconscious onscreen he may as well be. Ving Rhames too sticks with surly mode, breaking a scowl only twice to laugh – with each occasion looking like it hurts more than any of the tedious violence that befalls anyone in the film.

Final Rating – 5 / 10. This exact same film has been made 499 films before this one was produced, 460 of them turned out better than this film.