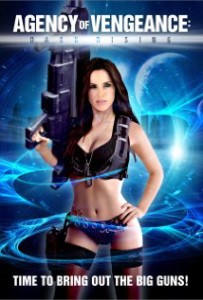 I didn’t know there was an Agency of Vengeance #1 when I chanced upon this on Netflix. I don’t think it matters. I didn’t understand what was going on as it happened, and I don’t remember what I just saw anyway.

When Tremors worms killed her husband on their wedding day, Summer Vale retired to the Men in Black style agency that exists to fight evil.

Summer learns that she must find the Book of Shadows to prevent some demon guy taking over the world. Apparently this requires her to engage in hand to hand combat while clad in nothing but lingerie. Three separate times. Another has Summer fighting another cute girl who is wearing lingerie.

In the Agency, you are most vulnerable to being attacked when you are standing about in your undies. Which is to say extremely often.

While none of the jokes really work you admire the cast for trying to turn this into a screwball comedy without resorting to lazy cameos and body fluid jokes.

This is the product of people who grew up on Nickelodeon shows and then found puberty both a troubling and inspiring time. Then, after a Xena marathon and the launch of the Lingerie Football League, inspiration hit. Low key inspiration, but while Agency of Vengeance is amateurish and sloppy, it’s hard to hate something that refuses to take itself seriously.

Besides, good looking women fight in their undies…

Final Rating – 5.5 / 10. There’s something to be said for at least trying to entertain, even if you ultimately fail.