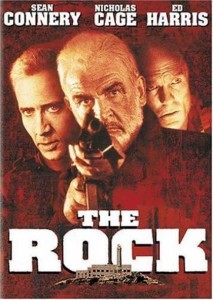 Ummm, Sean. The bad guy is behind you.

When bad guys take over Alcatraz island with a view to holding hostages to ransom, the government has the unenviable conundrum of how to penetrate the impenetrable, a facility purse built not to let anyone out – or in.

This being Michael Bay’s world – he’s the guy that sent a drilling crew to save the planet from an asteroid after all – only an office based research scientist and an old guy imprisoned against his will represents decency’s only hope.

Perhaps the most unexpected and annoying factor here is how absurdly entertaining this is at times. I cannot espouse it. I will not endorse it. But I can’t deny that for a few moments at least The Rock entertained me, whether I like the fact or not.

Sean Connery is John, the secretly imprisoned enemy of the state who is also the only man ever to escape Alcatraz prison. He is an unqualified genius – who proves it using only a coin and a length of fabric. After an interminable wait for him to agree to go along for the ride he is teamed with desk bound explosives guru in Stanley Goodspeed (Nic Cage) and a crack incursion team and a plan to use John’s reversing of steps taken some decades earlier to gain unseen entry.

But before that, a time out to raise the stakes for both John (estranged daughter) and Stanley (pregnant missus), followed by a chase through the San Francisco streets – where apparently EVERYTHING explodes on contact. Then it’s on to The Rock, where thankfully everything seems exactly to John as it was decades prior, and Ed Harris and his misguided loyalist soldiers await.

The Rock is overlong and overblown but reasonably competent. Perhaps the best thing I can say about it is that misses the mark by the least measure of any Michael Bay films. At least of any that I have had the misfortune to watch. The dialogue is mostly ok. (No space dementia here.) The action is ridiculous but effective, and ultimately wins the day thanks to the final hour, an unrelenting string of action sequences that is as unexpectedly pleasing as Armageddon’s last hour was painful.

I will continue to ignore The Rock publicly, and in all likelihood will never see it again. But the other night my pre-planned panning took a seat on the bench, replaced by a guilty two hour reminder of why Michael Bay somehow got the green light to create some of the most egregious examples of big budget dross on film, and why Nicolas Cage still warrants so many 27th chances after over a decade of misfires.

Final Rating – 7.5 / 10. Bay’s finest moment is far from great, but it’s undeniably enjoyable. For a while. Now where’s that soap to wash my mouth out with?