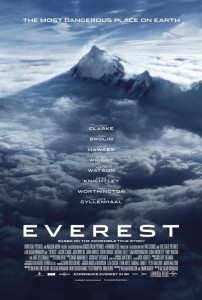 We humans have a tendency to try to do stuff we probably shouldn’t. We tell people they’re lunatics to even consider something and warn them that it well end badly. Then, when things do go bad, it is somehow an unfathomable tragedy.

I’m supposed to shed tears for people who ventured into deadly territory with a best case result of survival and no beneficial outcome for society? Nu-uh.

Still it makes for good films I guess.

Mount Everest is one thing humans should leave along. Tall and imposing, with insufficient oxygen, unstable footholds and a susceptibility for sudden weather changes, Everest is another place that should be given a wide berth.

That said, those considering an ascent to one of the most inhospitable places on earth should first seek professional help… Rob Hall (Jason Clarke) is perhaps the world’s leading expert on climbing Everest, leading a small group of paying punters each season in the short window where the weather is least life threatening.

1996 proved an especially busy season, with no less than twenty groups assembling at base camp waiting for conditions to become suitable to start their ascent.

With a small team remaining at base camp for a point of contact and ultimately a friendly welcoming committee to the returning climbers, Rob and his team acclimatise and prepare for the ascent.

The film savvily trots out a series of known faces; John Hawkes, Martin Henderson, Josh Brolin, Sam Worthington. We hear their backstories, their motivations and their loved ones waiting back home; Keira Knightley, Robyn Wright. Rob discusses the dangers and risks. He outlines the negative possibilities and the randomness that could lead to death. So many prescient words of warning. A list of disclaimers that would have me hailing the next yak down the mountain.

We know they cannot all survive.

Conditions are never perfect on Everest, and Rob approaches Scott (Jake Gyllenhaal) the comparatively carefree leader of a rival group, with a suggestion that they team up to join forces, supplies and skillsets.

The actual trail to the peak of Everest is well populated, not unlike a busy tourist trail. A stream of backpack wearing brightly coloured ants winds up the mountain as far as the eye could see, which is not very far at all with the wind and snow moving sideways with menacing intent.

It is always difficult to commit time and energy to a project only to give it up before it can be completed. This must be magnified when the project is incredibly expensive and perhaps once in a lifetime for most. But over exertion leads to exhaustion, and on the side of an uncompromising mountain a moment’s distraction can lead to death, and a short rest can become too relaxing to stand up from.

This is an expertly crafted film selling itself on the promise of certain death, and with the inhospitable and formidable Everest mountain sides it has a powerful accomplice in its murder, an enormous cheesegrater shredding human willpower and human life.

What Everest does best is build a sense of inevitable dread. This is carefully crafted sadness, with the climbers taking turns to cheat death, sometimes momentarily.
There might be two responses from most viewers here; those that say “I could do better than them” and those that merely nod to themselves that “yes, I would never even think of trying that”.

Final Rating – 7.5 / 10. That rumble you hear is the sound of a thousand adventure holidays being cancelled…