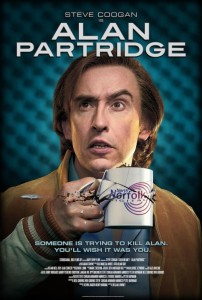 When a new ownership group struts into Partridge’s radio station offices announcing changes and job losses, the situation escalates when Pat (Colm Meaney) a disgruntled employee gate crashes the welcome party and takes hostages. His demands include acknowledgment and recognition, and he asks that Alan Partridge act is his intermediary between he and the police outside the building.

Bad decision. Of course Partridge proves unable to make sensible decisions. Torn between his ego and desire for self protection, Alan inevitably takes the worst option. Every time. With Pat being an ordinary man pushed to the very edge, it is unwise to put him in close proximity with a man who cannot tell the difference between pushing and pulling…

Unfortunately the outcomes, while amusing, don’t reach the same heights of the still hilarious TV show. Although in the later moments when Pat and Alan take the show on the road, the change of environment does the film good.

Lynn (Felicity Montagu) is on the scene as always as Alan’s overworked and browbeaten P.A. but their interactions lack the spark without them being face to face.

If you are lucky enough to know about the Alan Partridge TV series of the nineties, first of all well done. While those thirty minute episodes of awkward hilarity are filled with well drawn characters and a never ending series of brilliantly realised situations, all designed to shine the spotlight of washed up radio dj Partridge’s flaws, this overdue film is more for the completists.

Final Rating – 7 / 10. Pales when consider next to the TV, but does enough not to taint the memories.