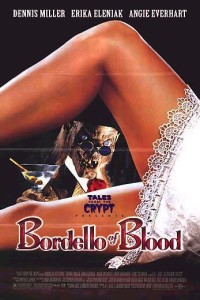 Two gents that you wouldn’t take home to meet mama fill their bellies with beer in a seedy pool hall and look to take their night further. Seedier.

After a referral of convenience the boys end up at a top secret establishment of ill repute, where the girls are willing and available in all kinds. There are hot chicks, topless chicks, and topless hot chicks.

Despite appearances though this hedonistic pleasure pad isn’t all well booked babes. It  also comes with a side order of large fanged females. Even if you didn’t order it.

This all takes place in the film’s first ten minutes or so, and though you wouldn’t know it yet the fact is the film has already fired its only shots.

The remainder of the film has Erika Eleniak – clothes on throughout lads – as a concerned sister, teaming with Dennis Miller as a private investigator who incessantly rambles through his sarcastic aloof bemused quipster act, regardless of what is going on around him. Miller at least knows he’s in a shitty movie from the outset. Eleniak seems to have no idea what to do with her clothes on.

Everything here looks cheap bar the tit jobs. The sets, the fx, the cameos, all phoned in. Only Chris Sarandon channelling his earlier b movie glory years shows the appropriate cheesy zest as a hootin’ and a hollerin’ rock and roll reverend.

This is a shlocky 2am TV short spun out to eighty minutes, purely in the draw of guaranteed nudity, which to be fair is at least the one area where the film is true to label.

Final Rating – 6.5 / 10. The laughs are few, the scares non-existent, but the film maintains its light spirit throughout, and yes the nudity is plentiful.