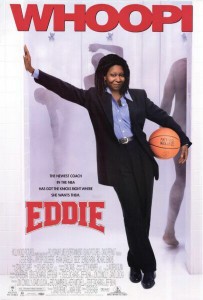 Until the next time Hollywood churns out another one, I will fervently hope that Eddie represents one of the last examples of the lazy “person who shouldn’t be given the job they are given” comedies.

But I will also know that my hope is doomed, because while there are Ferrell’s, Schneider’s and Sandler’s, this crap is inevitable.

When Eddie (Whoopi Goldberg) the loud mouthed opinionated chauffeur driver *slash* New York Knicks basketball fan flukes the job of head coach of the multi-million dollar professional sporting organisation, she moves from the worst seats in the arena to the hottest seat in sports. After all the New York Knicks haven’t won anything since the 1970s despite huge expenditure and the advantages of being in a huge market. The fans are more than impatient. The media scathing and ruthless.

(Most of the last paragraph has nothing to do with this film. It is reality. As a Knicks fan since my teens much of this film is eerily accurate. I actually wish they took the fictional sports team route… Sadness engulfs me.)

Let’s fast forward the formula; Eddie ‘inherits’ a bunch of no hopers, has beens and eccentrics. They have been losing and continue to lose. Eddie does her best but quite frankly she has no reason to hold such a prominent role. Consider first her highest qualification is a limo drivers license. But the flamboyant cowboy them owner Wild Bill (Frank Langella) knows that any media attention is attention. He urges Eddie to continue despite all evidence to the contrary.

In desperation Eddie tries crazy methods to get through to the group. And you’ll never – EVER – guess how it all…

Oh wait you already did?

Eddie is a bizarre promo film for the Knicks, who must have been crazy and/or arrogant to allow their franchise to be depicted like this. There are cameos galore from a billion NBA players and New York personalities of the era, including an already pompous and aggravating Donald Trump, but nothing that adds much value. The basketball action is contrived and not memorable for the most part (if I make the instantly doomed comparison between this film and the incomparable Major League, nothing holds up, but least of all the sports sequences).

Still, it’s amiable enough and harmless. There are a couple chuckles along way, and while the cheese all ending was pretty embarrassing, it adheres to the general tone of the film. I think I just tried to praise the film, and frankly that’s the best I could come up with.

Final Rating – 5.5 / 10. The worst part of all is despite how insane this all feels, if this happened it couldn’t be much worse than the reality for the franchise for the last two decades. In other news, Go Knicks.