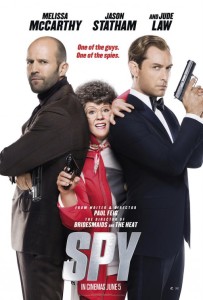 I was asked this recently by a work colleague; “if Adam Sandler and Will Ferrell have made careers out of people laughing at them, so why do I have such an issue with Melissa McCarthy doing the same?”

My response was actually remarkably easy. First, I loathe the fact that mssrs Sandler and Ferrell are revered for being lazy and predictable. Second, in my admittedly limited experience of Ms McCarthy’s work, it strikes me that she has settled for perpetuating a stereotype of being a *ahem* larger woman without supermodel looks. Neither of one things are false (or especially unfortunate, this just makes her like the rest of us) but neither are they instantly hilarious.

It was McCarthy’s somehow prominent lurking on the poster that prevented me from checking this out earlier, abetted by the small print that says ‘made by the guy who made two other films you hate’. But the R rating and calming influence of Jason Statham eventually won me over.

The first half of Spy did little to placate me. McCarthy is Susan Cooper, an eager to please yet stumbling and bumbling CIA office based liaison to Jude Law’s Bradley Fine, a suave and debonair Bond style superspy. The pair are always in constant contact through the most tense of situations, with Cooper openly flirting and Fine laughing and charming and missing the point entirely. These delightful misunderstandings were repeated like a jackhammer for so long and with so little subtlety that I wonder just how stupid the filmmakers take their audience for. And if the audience does need such prodding why bother?

When Fine is killed before her very digital eyes by femme fatale Rayna Boyanov (Rose Byrne), Cooper learns that the cover of all CIA field agents has been compromised, and furthermore Boyanov has a bomb that she is planning to use with evil intent. With no other option, it is Cooper that must head out to discover the truth.

If that all sounds so very familiar, it’s because it totally is…

Once in the field all of the deficiencies hidden behind a desk job are beyond concealment, what with the spy biz obviously being such a glamorous and sexy world. As tacit acknowledgement of this, Cooper’s (and McCarthy’) unsuitability to the stereotype is again clumsily bashed home. Her secret identities are – in quick succession – frumpy housewife and crazy cat lady. Her ‘secret spy kit’ of Q style inventions is disguised as hemorrhoid cream and other similarly awkward personal care items. The arrival of disgruntled agent Rick Ford (Statham) only heightens how out of depth Cooper is – even when Ford frequently proves that he is hardly a flawless operative.

Cooper vomits after – and on – the first guy she kills. No need for embarrassment there. But it is only after an abrupt change of gear, literal and figurative, that sees Cooper find her comfort zone, when an unexpected development puts her in front of Boyanov, but has the Russian spy in her debt.

The close proximity has Cooper and Boyanov feeling each other out and constantly looking for loopholes. It is when tentative needling makes way for verbal conflict that the film finally builds some momentum. The script suddenly shelves the lazy gags about McCarthy being frumpy and gives her someone adept to play off again stand the film is all the better for it. The fact that a very obvious stunt double is employed for McCarthy in action sequences is understandable but a little disappointing (surely it could have been concealed better) but I’d rather watch an out of her depth lady in hand to hand combat than have her size be the butt of every joke.

Unfortunately while the escalation of action brings better results, it is still little more than a James Bond rip off, not at the same level of this year’s Kingsman, and light years away from True Lies.

It was coincidence that had me watching Spy and St Vincent almost back to back this past week. It is not meant to be condescending when I say that McCarthy is better suited to dramatic roles than comedy, but if remaining in comedy involves little more than a steady stream of fat jokes, then I’d rather she stay serious.

Final Rating – 6.5 / 10. Under the easy jokes and boring stereotypes, is a generic spy spoof film. How this is one of the films of the year is a mystery to me.