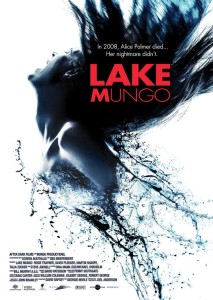 Lake Mungo is horror blue balls incarnate. An hour and a half of unfulfilled tease. All build, no payoff.

In the small Australian town of Ararat, a young girl goes missing. Her name is Alice Palmer and she is presumed drowned. Her family and friends are understandably distraught as a search party finds nothing. Then, at the suggestion of photographic evidence, the local dam is searched, and the body found…

Within days the family hear noises in their small home late at night. They have visions that signify that perhaps Alice is not at rest are all. Video cameras that film at low frame rates to maximise recording duration are installed about the home.

The ‘reality’ of the situation chops and changes with astonishing frequency but it never veers into parody or settles for cheap boos and jolts. While the tension is palpable, the second half does eventually become a series of “when you see it- you’ll shit bricks!” memes, with photos and video disseminated Dana scrutinised to the nth degree, often leading to multiple reveals.

But unless the very prospect of ghosts chills you to the core, the horror is in short supply. Lake Mungo traffics in unease. I watched it alone. Late at night. In the dark. With the volume up. And only once did the hairs on the arms – those sure fire horror detectors – stir.

I can attest to Lake Mungo’s credibility and the assured nature of its crafting, but I can’t truthfully label it scary. And if you’re not a horror you’re a drama, and this ultimately is too little of either.

Final Rating – 6.5 / 10. A nice low key curio that needed just a bit more to set it off. Sometimes, scared is better…