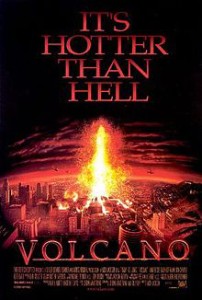 Imagine what you might do if a volcano erupted in your city. Imagine what the authorities would do. Imagine how the general population would react. Well imagine no longer, because here is the film that will tell you. All that and nothing else!

My word this is dull. From the steadfast logic of Mike (Tommy Lee Jones), the boss of Emergency Services character, to the wide eyed information provided by the handily available scientist Dr Amy (Anne Heche), this is by the numbers procedural work, with all the excitement of an audit.

Even the eventual arrival of the boiling hot magma does little to give genuine heat or tension. Even the concept peril is merely a tease, every time they beat it back or divert it, the oozing fury just changes tack and heads elsewhere to generate more mild annoyance.

The one ‘high’ point arrives very late (the real one is actually when the film ends but I digress) when Mike must run 300 yards to beat both an encroaching lava flow and a falling building, to push two people three feet to safety. Surely yelling “TAKES TWO STEPS LEFT” would have the same outcome…?

Early on in the film a character gives a ludicrously unlikely stat about fault lines and then says ‘never say never’ about the possibility of a Los Angeles based volcano. This film puts the O No in vOlcaNO. We should never say never, but based upon this we might occasionally say ‘not now’.