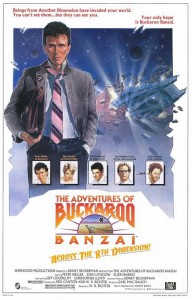 Let’s see, Buckaroo Banzai is a half Japanese, half American son of genius scientists who assembles a team who travel on a big bus with Buckaroo’s name emblazoned on the side, to go so very fast that he can drive through dimensions. Afterwards they gather in smoky clubs to play smooth jazz, unironically.

Oh and one of the guys dresses in bright red cowboy leathers and hat for no stated reason aside from he really likes that.

This is all very Repo Man via They Live but with bigger names than the first and less of the humour of the latter.

There are aliens, crazy scientists and a plot that couldn’t make less sense if it was run through a shredder before being handed to the director. It’s one of those ‘you had to watch it at the right time’ films, except ‘there’ was 1985, baked and will fully non-mainstream.

Perhaps the funniest moment is the closing frame, where we are promised (threatened?) with a blurb saying “watch out for the next adventure”…