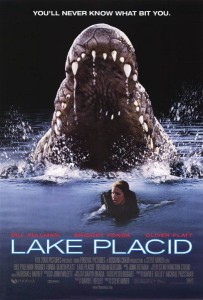 Lake Placid gets it. It knows that the creature – in this instance a crocodile – and the kills are secondary. It knows no-one is going to win an award out of this. It knows that being simple can work, but being one note will not, especially if it doesn’t absolutely nail that one note.

Lake Placid gives us rich characters, funny characters, and puts them in close proximity where their differences, eccentricities and failings generate friction, friction that they then use for humour and tension. Mostly humour. Humour which tip-toes neatly the line between mean and acerbic, while always remaining at least genuinely amusing and quite often hilarious.

And that’s all before the introduction of the multi-toothed scaly beastie.

Of course it is the beastie that brings all together; Jack Wells (Bill Pullman) from environmental protection, Sheriff Hank (Brendan Gleeson) from local law enforcement, Kelly Scott (Bridget Fonda) from animal research, and Hector (Oliver Platt) the possibly lunatic millionaire thrillseeker. With the mix of urban and rural, learned and naïve, tough and fragile, the derogatory belittling and one-upmanship starts early but never really stops. Hector mocks Hank. Hank and Jack have inter-departmental rivalry. Jack wonders why it is necessary for Kelly to even be there, but at the same time kinda admires and fancies her.

Not part of the core crew, but still managing to steal her share of scenes, Betty White appears as a woman who lives alone on the lakefront, pioneering the ‘profane grandma’ which has since become a staple of lazy comedies. At least she didn’t rap…

You can tell just from the names that this is far from your usual B Movie cast, and while none seem comedic specialists they all shine, with only Platt threatening to overplay the material – understandable given he is an eccentric millionaire. The banter and occasionally risqué dialogue underpins even the most taut scenes, but fills the ‘in between’ sequences with amusement our maintaining interest between chomps.

Ultimately though the poster promise crocodiles, and again the film pays off in spades. In the initial ‘tease’ sequence that justifies the call for investigation we don’t even see the protagonist. We do definitely see his power and the impact of his aggressiveness though, which is all the more rare given the incident takes place in a small murky lake countless miles from a coastline or the normal habitat of any reptile.

We must wait until almost half way through the film for something more significant, again a reason the effectiveness of the dialogue helps keep us on board, but once the crocs arrive the payoff is worth the wait.

For late 90s CGI the effects are surprisingly strong, our thirty foot long man-eater looks extremely realistic and indulges in his screentime.

Lake Placid gives us human characters far more credible and amusing than the genre suggests, and more effective and realistic creatures than these films usually supply. It is the best of both worlds, with the combination ensuring that this film remains a genre highpoint that the increasingly shitty sequels are yet to sully.