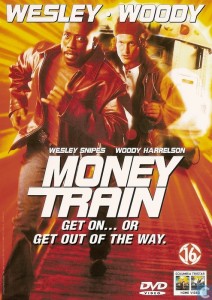 With White Men Can’t Jump being an unexpected hit, it was entirely expected that an attempt would be made to cash in on the chemistry between Wesley Snipes and Woody Harrelson.

And while I get the decision to make them both pals and colleagues, making them brothers seems a stretch, even with the hackneyed justification…

John (Snipes) and Charlie (Harrelson) are undercover subway police, baiting potential criminals by playing easy targets, mainly sloppy drunks just asking to be fleeced. While this sounds very much like entrapment, it gives plenty of opportunity for banter and hijinks, especially for those who watch on from behind cover, tasked with nabbing the bad guys silly enough to be sucked in.

With Christmas approaching and free time a problem for Charlie, who has a weakness for gambling and a gambling skillset weakness, he and John look to other distractions.

Most prominent and shapely is new team member Grace (Jennifer Lopez), because if you are going to make a mistake it might as well be with the new hot chick. Most dangerous and potentially lucrative is taking down the money train, the single heavily armoured car tasked with carrying all of the subway takings for processing. Although if you think of it marrying J-Lo in the mid 90s would have certainly generated more unearned income over the next two decades than any single train.

John and Charlie trade barbs and good natured insults. While the film wonders if it is more concerned about the potential love triangle with Grace at the centre, Charlie’s gambling issues, or whether they should get to the inevitable train takedown. The film could have used a little more of the straight out evil subway department head, a man so consumed by his love of the money train and disdainful of all else. Also a man with a never ending stream of some of the more creative and genuinely nasty put-downs and belittlings. He adds an edge that the film desperately needs. And could have used more of.

Snipes and Harrelson get straight back into the easy back and forth that was their WMCJ trademark, with J-Lo taking the Rosie Perez Latino chick in the middle role though J-Lo adds nothing beyond what she brings to her album covers; I.E. Vacant personality free good looks.

The heist itself – while overdue – is over the top and exceedingly unlikely, both good things after spending so much time on unnecessary subplots. It did inspire me to wonder whether repeatedly calling the thing the ‘money train’ might be a deterrent to those pondering a life of crime? Or whether the chemistry between two guys is sufficient to justify us hoping that they succeed in perpetrating a capital crime…

In any case Money Train comes across as a muddled and rushed affair, relying on the likability of the cast to get by, and an implausible boom-crash finale to gloss over the deficiencies.

And for all that it is actually mostly entertaining.