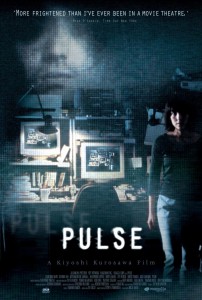 Righto, another Japanese ghost story along the lines of The Ring and The Grudge, among others.

I hadn’t heard of Kairo but picked it up off the shelf after reading some glowing blurb on the DVD cover, (Stupid. Stupid! STUPID!!). What I found was a depressing, disjointed and generally confusing piece of low rent filmmaking in search of inspiration that never came.

The basic premise of Kairo is that there simply isn’t enough room for ghosts anymore, so they must find “other means” to be heard, and are often forced into the environment of the living.

At least that is what I am going with, this thing is as confusing as fuck.

When I say “other means”, in this case it means ghosts have gone high-tech, they are more internet savvy than most teens, and aren’t averse to calling the odd mobile phone for a chat. Where the title Pulse comes in I have no idea, a more catchy title would have been Ghost Hackers, would’ve made more sense too.

Now a bunch of stuff happens in Kairo and I’m sure if you took the time to watch it you might initially not notice that none of it makes sense whatsoever.

It seems that from the early stages the ghost(s) seem to be targeting the employees of a Japanese plant store, as one by one they are bumped off.

So this is a summary of the first hour:

“Taguchi is missing… and he has the disk!”

No more Boss. (Yay sickies for everyone!)

You might then more rationally ask “But is it scary, do they build tension?” Well now that’s a better question. The answer? Not really aside from one scene that took forever, also made no sense, and then finished up by being a wannabe The Grudge out-take, not something I would aspire to.

Sure there are the subliminal things that seem to come up a lot these days:

–         The reflection that can magically be enhanced and magnified from a crappy resolution image on a PC screen.

–         The shadow on the edge of the screen walking behind while a “whoosh” sound effect is used to highlight the sheer scariness of it all.

–         The dimly lit room that when better lit shows a motionless person standing behind you.

The one scene that is effective, occurs when one of our loyal Plantco employees visits The Forbidden Room. Now you aren’t supposed to visit the Forbidden Room. Why? Because it’s forbidden, that’s why. The scene plays out like it should and while you wonder what is going on tension does build. Taking away a little is some ludicrously cheesy and offputting “Oooooohhhhh” music, (it’s really bad).

There are many more scenes that are quite randomly edited together so as to remove all continuity and not allow the tension to build. This frequently took me out of the movie as I was always on my heels wondering “Why are we back with this guy when 5 seconds ago we seemed to be right in the middle of the other girl doing something?”

The Ring was a great remake of a Japanese horror flick, The Grudge less so but justified a look, The Uninvited mainly sucked.

In the case of Kairo I think the US filmmakers had a better than normal chance of improving on the original, because it just isn’t much chop in the first place and is all over the shop.

Final Rating – 5.5 / 10. All sloppy editing and pursuing a concept that isn’t scary in the first place makes Kairo a dull movie.