Rob Zombie: The Early Years – House of a Thousand Corpses / The Devil’s Rejects 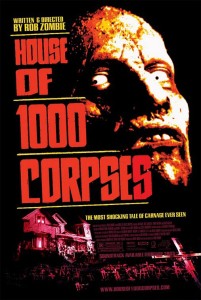 House of a Thousand Corpses

There is no such thing as a good place to break down, but in the movies it always seems that inopportune stuff happens in the very worst places.

House of a Thousand Corpses is director Rob Zombie’s love letter to the good old days, only his letter appears to be little more than a clumsy grab bag of bits stolen from other films. Some grainy home video effects and sharp edits cannot conceal a lack of vision or flair.

In this film a car full of travelling geeks traverses the U.S. looking for the kitsch and the weird. In this film they came to the right place! On this rainy night they chance upon a haunted house style museum run by Captain Spaulding (Sid Haig), a filthy old curmudgeon always rocking full clown makeup. He gives them a shock and a laugh and sends the crew on their way, right down the road, where the breakdown happens…

Fortunately (?) there is a large home with a light on down the road. Of course the fact that it is chock full of bona fide nut bars is initially disconcerting, but I think once dessert arrives and everyone dons the crazy masks that apparently must accompany each sweets course, I would feel far less worried about my safety and especially that of my nubile young female companions.

Why indeed. Zombie might be a fan of a bygone era, but why show love to the past by creating something inferior in every way?

Final Rating – 5 / 10. Does the fact that the film ‘boasts’ a character named Dr Satan give you an indication of the craftsmanship on display? It should. 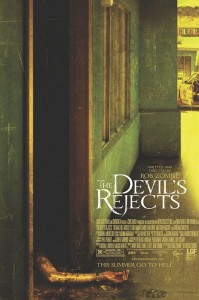 First there was the House of a Thousand Corpses, home to the inimitable Dr Satan. Now, the Devil’s Rejects. It seems like Rob Zombie has a never ending stream of discarded song titles from his shock rock days…

On the evidence of House of a Thousand Corpses there was no reason for Dr Satan, Captain Spaulding and the moronic hangers on to ride again, but ride again they will, after an inept law enforcement raid proves as stupid as they are numerous. And there were a great many of them.

In this film siblings Otis and Baby take centre stage. Otis carries weapons to peel flesh, while Baby has an inane laugh that peels paint. And hot on their trail is William Forsythe  as a driven cop nearly as loco as those he pursues.

Even though the media trumpets their escape and boosts their profile as the Most Wanted around, these morons – like Rob Zombie – have zero subtlety. They wander about in plain daylight, bedraggled and blood covered, with no disguise or attempts to lay low.

The rest is dross dressed as homage. The cast seem to think it is fun. They talk rubbish, burst into laughter for no reason, and all the while I envy their simplicity and wonder “why?”