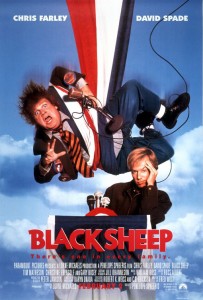 Al is a politician. A well meaning one. Al is running for office in some state of the U.S. Al is not the problem though. Mike is.

Try as he might, Mike (Chris Farley) cannot avoid trouble, the kind of trouble that gives him – and by family association Al – a bad name.

Young ambitious staffer Steve (David Spade) offers to take the hit if it will keep his name high on the list of promotables. He will keep Mike out of the way and out of the spotlight until the election.

Cue an hour of Chris Farley shouting, hurting himself and shaking his jowls uncontrollably. Bystanders – especially old people – can’t understand his energy and ‘in your face’ attitude. Young people somehow find him a magnetic presence.

For five minutes Mike and Steve run around in a room because of a small rubber bat on a string. In another scene Mike finds himself on a stage interrupting a rock concert, and the crowd cheers for no reason. I think both of these scenes neatly encapsulate Farley’s career; fishing for laughs in an empty bucket, followed by scenes where the film tells infers we should laugh because ‘others’ are finding it funny.

Spade has some dry and wry lines. But so?

Gary Busey plays a crazed ex-soldier. But so?

Farley was mourned after his untimely death as an amazing comedian lost to the world. I don’t see it. And apparently Black Sheep is his best film.

Final Rating – 5 / 10. Somehow proof falling over and farting is sometimes not funny.