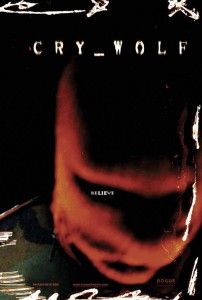 Owen is the new kid at school. He is good looking and has that adorable Harry Potter accent. The cool kids immediately embrace him though none of the cool kids actually seem to like him – or each other. You’d think that genuinely cool kids in high school could find other kids they actually like spending time with, and not allow themselves to be bound together by mere ‘coolness’.

This must be the conundrum of the cool. I never knew this at any stage of my life. This development pleases me.

The cool kids, 8 in total including Owen, have a game. An awesome game. The object of the game is to lie and get away with it. Or pick the guy lying. Or work out which guy isn’t lying. Look I didn’t for a second understand the point of the stupid game. I just finished telling you I wasn’t cool ok?

Just know that they one they were trying to identify – or maybe avoid – was called the ‘Wolf’.

Anyway after one game the cool kids grow bored of their favourite game. The fickleness of the cool. They decide to broaden the horizons of the game and float an Internet rumour that there is a serial killer operating in schools known as the ‘Wolf’. Clever eh? Probably more on paper maybe.

Within hours of the initial rumour being unleashed, Owen gets emails from the Wolf. Threatening emails. Descriptive emails. Scary emails.

He tells the other cool kids that the person that they made up is not only real but pissed that they blew his cover. He’s also pissed that they described his orange balaclava disguise – even though for all they knew it didn’t exist.

As the tension (apparently) ratchets up, Owen finds solace by confiding with fiery (as in smokin’ hot) redhead Dodger, and the coolest teacher in the school (Jon Bon Jovi), who is cool enough to have seen everything before.

Is it real? Is it a dream? Is it… Amazingly… And… Unnecessarily… Convoluted?

I won’t spoil the first couple, but you might already be able to guess the chances of the third coming to pass. Whether you are a cool kid or not.

Final Rating – 6 / 10. There is far more snoozing than slashing in this slasher.