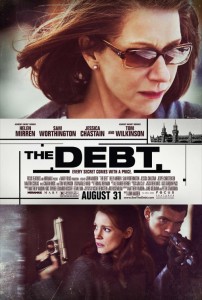 This will not be an exhaustive, blow by blow description of The Debt.

That’s not because it is a lesser film. Far from it. It is because saying too much about the plot risks either giving too much away or causing confusion.

The Debt opens in the 1990s but primarily concerns events some three decades priori, where a small team of Mossad operatives found glory in the tracking down and apprehension of a former Nazi general, a man with a past of reprehensible crimes against the Jewish people.

For this the trio are lauded and their exploits are still celebrated, on this occasion by the release of a book chronicling the event. A tale of an imperfect mission with perfect results, namely the eradication of an evil human being.

The film though tells a larger story.

The cast is uniformly excellent. In the 1960s the trio are Jessica Chastain, Sam Worthington and Martin Csokas, their older selves in the 1990s are played by Helen Mirren, Tom Wilkinson and Ciaran Hinds.

The film unfolds over the two timelines, intercut so that we learn about the two realities simultaneously. With little exposition given in the early stages it rewards the patient and vigilant, with some solid action sequences and more than a little tension.

Perhaps it is because The Debt is so hard to describe without spoilers that it remained a largely unknown film, it cannot be because of the quality, which is excellent. The Debt might not be too high on anyone’s Netflix list, but I urge you to check it out for yourself and discover all the things I cannot say here.

Final Rating – 7.5 / 10. A very worthy action drama with a great cast and a plot that unravels before you.

While I try to throw a joke or two into proceedings when I can all of the opinions presented in my reviews are genuine. I don't expect that all will agree with my thoughts at all times nor would it be any fun if you did, so don't be shy in telling me where you think I went wrong... and hopefully if you think I got it right for once. Don't be shy, half the fun is in the conversation after the movie.
View all posts by OGR →
This entry was posted in Film, Movie Reviews, OGR Recommends, Special Requests, Worthwhile Movies. Bookmark the permalink.