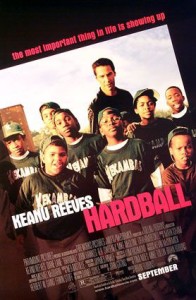 If Keanu really wanted to revive his flatlining post-Matrix career, he could have picked a script that wasn’t jotted down on the back of a bar mat.

Keanu never gets out of second gear playing O’Neill, a drunken degenerate gambler with debts that might get him killed, and a self destructive streak that just might make him like it.

With all of his friends long gone, O’Neill reaches out to the one guy who will still take his calls, and is predictably denied another bailout. Instead he finds himself teased along with a weekly pittance, so long as he…

… Agrees to coach a group of sassy, irreverent, profane, street hardened and above all underprivileged young black youths to play baseball! Changing everyone’s lives for the better is optional.

And O’Neill thinks – undoubtedly just like Keanu himself when he agreed to this role – let’s just get through this and get paid.

Everything you instantly think of when you hear this flaccid premise, happens just as lazily as you think it will.

The kids are just as roguish and vulnerable as the formula demands. O’Neill learns just the right number of lessons in the permissible proportions.

Look it’s just fucking dull. Lacking both hardness and balls. We all get it?