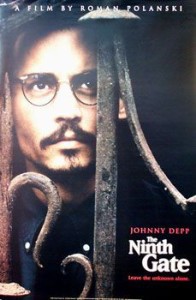 Corso (Johnny Depp) is an opportunistic and unscrupulous dark literature expert, valuing and sourcing unique and rare items for other collectors and himself.

It is when he is commissioned by Balkan (Frank Langella) to find not one, but four, editions of a kind of satanic bible, that he is hurtled into a dark, macabre, and immaculately furnished, world. It is rumoured that the one true book contains hidden clues that unlock the darkest secrets known to man. Including possibly the one true location of Where’s Waldo?

As Corso saunters casually across continents, meeting well mannered men and women who all talk politely and articulately, the sense of mystery and promise of Big Things brings anticipation.

Unfortunately the promise cannot be fulfilled. Despite strange book owners, strange women and strange strangers, there is only one ‘whaaatt?’ moment in the first two thirds of the film and the finale is also an overwrought fizzer.

You hang in because the theme screams ‘satan!’, and we all know the big red guy gets all the interesting action, but The Ninth Gate is the equivalent of a long long walk through the empty halls of an art gallery, to watch someone sit on a whoopie cushion.