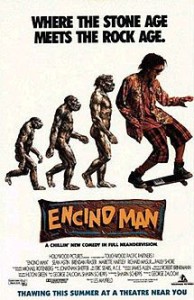 Hadn’t Bill and Ted already proved that you didn’t need to be a thawed out caveman to act like an idiot and yet somehow still appear moderately cool?

David (Sean Astin) and proto-hipster Stoney (Pauly Shore) dig up the formerly frozen Neanderthal in the backyard, slap some fly threads on him, teach him to dance (badly) and call him Link – as in ‘the missing…’

Somehow this makes them cool by association, because – you guessed it – Link proves the flyest kid in school, wowing the fellas and making the ladies knees wobble.

And yet David and Stoney still almost get left behind as Link effortlessly ascends the social ladder while they hesitate on the sidelines.

Amazingly enough it is Pauly Shore that is quite obviously the most logical thinker of the trio. It makes sense that a man out of touch for thousands of years would take a moment to assimilate, but David’s thought process is the one from the Stone age. With his only aim being ‘nail the unattainable chick’, he nonetheless takes the wrong option at every turn, leaving him look further and further like he is the man from another era.

The only amusement comes jabbering and random-pausing from beneath the hippie hair of self-professed ‘weasel’ (both in this film and in his private life) Pauly Shore, which isn’t nearly as strangely eccentric and endearing as it was when I was a dumb teenager myself. Hard to believe that his shtick granted him a short career, but for a few years in the early 90s he had Sandler status among impressionable teens.

Final Rating – 6 / 10. Some twenty plus years since release it is now Encino Man that is the relic, and perhaps one better left on ice…