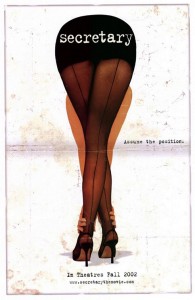 Move along. Nothing sensationalist here…

Lee Young (Maggie Gylenhaal) is a young woman with problems. She arrives home to her loving but somewhat suffocating family fresh from a lengthy stint at a care facility catering to those with mental health issues, and decides to get back out into the world.

Unfortunately, or – as the film would suggest – fortunately, Lee applies for a receptionist’s role, working under a lawyer named Edward Gray (James Spader).

Nonetheless that is the film here. Grey starts with mere browbeating and belittling, and progressively escalates until… well let’s just say that a dead worm pressed into a letter plays a pivotal role in clinching the deal. Lee might not be able to type well, but she can take a paddlin’…

If I criticise this then I’m clearly out of touch with a world that I’ve never felt the need to investigate or research. Or it might be just as easy to accuse me of having no sympathy for people with special disorders – even if the film clearly has the person with lesser mental faculties as the one being manipulated.

Whatever option you choose; I’m unapologetically that.

People with mental issues can fall in love. It no doubt can be tender, adorable or quirky. No doubt such material could result in a good film. But there is little nuance on display here, Lee is the innocent bunny, Grey the creepy predator. I would have thought that her mental issues would convince an audience of that. Apparently not.

Secretary has been dubbed a precursor to ’50 Shades of Grey’. It might be an apt descriptor, but given that the latter is universally labelled the work of a hack, does being a pioneer in the genre mean much?