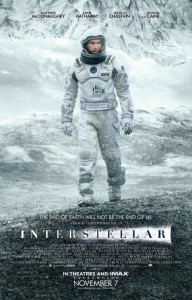 One giant leap for alright alright.

Many years ago, before the Earth deteriorated and arable land became so scarce that farmers were more valued than investment bankers, Coop (Matthew McConaughey) was NASA’s best space pilot. That was then. Now Coop is a diligent widowed farmer with two young kids, working to keep humanity fed, periodically hunkering down away from the huge dust storms, and sheltering from the blistering sun.

That is until a chance finding leads Coop and his young daughter Murph to a secret underground location, where old acquaintance Professor Brand (Michael Caine) tells Coop that not only is NASA still (barely) functioning, but it believes it has a shot of saving humanity from its doomed receptacle. As the film’s title suggests the plan doesn’t involve a dinghy…

After tearful goodbyes Coop finds himself aboard one of Earth’s last spaceships, leading a four person (and one robot) crew to a distant planet that they hope has a liveable atmosphere.

Interstellar is a brave film that embraces the difficulty of space travel and all of the potential scientific dilemmas that it brings. Black holes, an absence of gravity and the disparity of time relativity are all addressed, and indeed play key parts in the plot, to the point that Coop eventually receives messages in deep space from Murph, his daughter who is nonetheless older than he is – which must be weird.

While it is yet another ambitious and original effort from Christopher Nolan, there are more than a few ‘dead spots’ where unnecessary talk and exposition wastes oxygen and time, and too many small similarities to the 2001s, Prometheuses and co (especially Contact). It also doesn’t help that Gravity stole the thunder of all the incredible visuals, and that as a ‘serious’ film it eschewed phasers and jetpacks and stuff, but still has a few concepts that might be technically possible, but seem a little less possible than logic would suggest…

That said Interstellar has a top notch cast for the most part, some of whom didn’t get their names on the poster, and it again proves that even Nolan’s lesser efforts are more interesting than most of the regurgitated crap that fills cinemas these days.

And you know, in order to get a hit you must at least take a swing. Keep swinging Mr Nolan.

Final Rating – 8 / 10. An excellent film that is a little long, a little dry, and a little occasionally implausible to broach greatness.